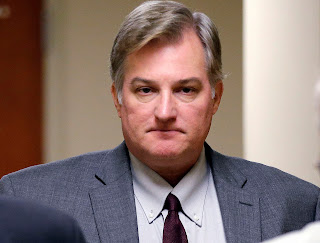 A white former police officer in Oklahoma was sentenced Monday to 15 years in prison for the fatal off-duty shooting of his daughter's black boyfriend, after four trials spanning nearly a year including three that resulted in hung juries.

Kepler's lawyers said the 24-year police veteran was trying to protect his daughter because she had run away from home and was living in a crime-ridden neighborhood. Kepler, who retired from the force after he was charged, told investigators that Lake was armed and that he shot him in self-defense. Police never found a weapon on Lake or at the scene, and several neighbors testified that they didn't see a gun, either.

There also was a racial undercurrent to the trials. Kepler killed Lake days before the fatal shooting of an unarmed black 18-year-old by a white police officer in Ferguson, Missouri, fanned a national debate over the treatment of minorities by law enforcement.