Ben Carson throws his wife under the bus over $31,000 dining room set 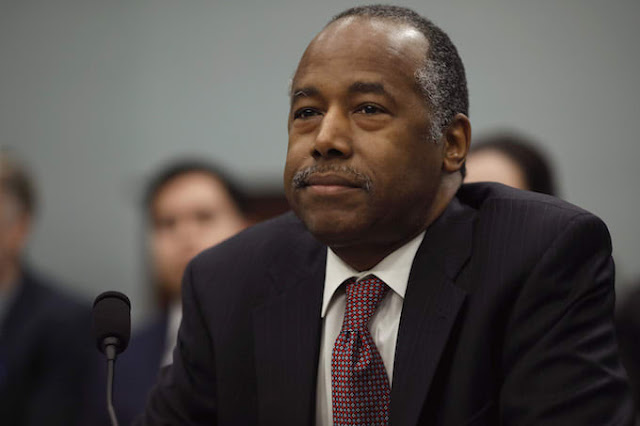 While testifying before the House Appropriations Committee about the infamous $31,000 dining room set, Secretary of HUD Ben Carson stayed awake long enough to blame the entire fiasco on his wife. Wow, I wonder what he would blame her for if he didn't love her? George L. Cook III African American Reports.

Housing and Urban Development Secretary Ben Carson pointed to his wife when pressed about the purchase of a $31,000 dining set with taxpayer money, despite internal HUD emails claiming he also had a part in selecting the furniture. Carson, testifying before the House Appropriations Committee, said he left decisions with his wife, Candy Carson, and was shocked to hear how much it cost.

The purchase of an elaborate furniture set has cast Carson in an unwelcome spotlight in recent weeks. A spokesman for HUD initially said Carson had nothing to do with the purchase of the furniture, despite emails obtained by the nonprofit watchdog American Oversight claiming Carson and his wife made the selection.

"I asked my wife also to help me with that, they showed us some catalogues, the prices were beyond what I wanted to pay, I made it clear that that just didn't seem right to me, and I left it with my wife," Carson said of the furniture selections. "I said, 'Help choose something,' but I said the money that is going to be used -- 'we need to take care of the deputy secretary's office, and you know whatever is left over I'll take care of the dining room furniture.' It was very important to do that, and I realize that, but I had some many other things to do at that point. You know, I had no assistant secretary, no deputy secretary. I was running from place to place dealing with a lot of important issues, so I really wasn't that concerned about furniture. The next thing that I quite frankly heard about it, was this $31,000 thousand dollar table had been bought. I said, 'What the heck is that all about?'"

HUD has canceled the order.

This isn't the first time Carson's wife has been blamed in relation to this matter. An Aug. 29, 2017 email from HUD chief of staff Sheila Greenwood to HUD administrative officer Aida Rodriguez and executive assistant to the secretary Allison Mills reads, "I believe Allison has print outs of the furniture the secretary and Mrs. Carson picked."

But when CBS News asked HUD spokesman Raffi Williams about the claims of Carson's involvement, he simply said, "When presented with options by professional staff, Mrs. Carson participated in the selection of specific styles."

The internal HUD emails show finding new furniture for Carson was a high priority at HUD, for at least six months. The emails also reveal HUD staffers were pressured to find a workaround for the $5,000 legal limit for federal executives to redecorate their offices.