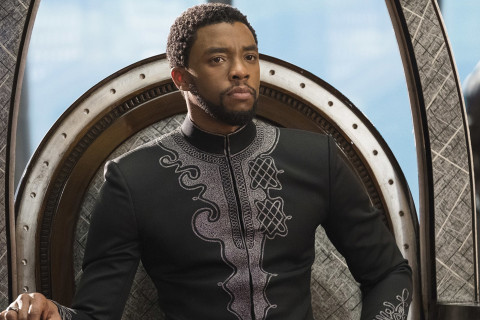 (RNS) — Xavier Cooper went straight from his shift as a cook at a fast-food restaurant to an early showing of the “Black Panther” movie — sponsored by his church.

As his elders at Jonahville African Methodist Episcopal Zion Church in Huntersville, N.C., had hoped, the film had a profound effect on the young man, a leader in the church’s youth group.

Cooper exited the theater with a buoyed confidence about his dreams after spending two hours watching the futuristic kingdom of powerful black people in Wakanda.

“Being an African-American, it shows you that you can do anything you want to,” said Cooper, 17, who wants to own his own record label and production studio.

Across the country — from California to Chicago to Virginia — members of black churches have bought out theaters for screenings and dressed in their favorite African attire to see a superhero who looks like them. And others, from a New York multicultural congregation to a Detroit Muslim professor, are also tapping into the movie’s messages they hope will be particularly affirming to young people of a range of races and religions.

The Rev. Latasha Gary, Cooper’s youth minister, said 67 people attended the Feb. 16 showing organized by their church near Charlotte, and dozens had to be turned away when they ran out of seats.

Black youth get tired of seeing negative depictions of people of their own race in movies, said Gary, who wore a yellow and brown African dress to the movie showing. “When we found out that this was going to be an epic tale that actually was written by black writers, costumes designed by black costume designers, we were just, like, ‘We have to go see it.'”

While the movie tells a fictional story, some religious leaders said its lessons about generosity and brotherhood and sisterhood promote their values. Some also saw specific ties to their faith.

“It’s not a perfect movie but it has so many affirming messages,” said the Rev. Warren H. Stewart Sr., pastor of Phoenix’s First Institutional Baptist Church, which organized an outing to see the movie. Among them, he said, were “mutual respect and affection toward one another, being made in God’s image and likeness. Even with the death of the star … I saw immediately the concept of death and resurrection, the fact that he came back to life.”

Trinity United Church of Christ in Chicago hosted screenings of the movie and created a “Black Panther Study Guide” that calls the historical Ethiopian Empire the home of the biblical Garden of Eden and “the real Wakanda.” It reminds that the Ethiopian Orthodox Church “has her own pope.” The movie’s lead character T’Challa is “a king, a leader, a mentor, and a reflective spiritual individual,” the guide says.

The Rev. Hodari Williams, pastor of New Life Presbyterian Church in College Park, Ga., planned a sermon series related to the movie after attending a Feb. 15 screening organized by his predominantly black church. Among his themes is not keeping your gifts to yourself. As Wakandans learned in the movie, he hopes his church will “make our resources the resources of the community.”

Williams, who wore a blue and white dashiki from Ghana when he saw the movie, said he also wanted young people to gain a sense of the beauty of the African continent.

“In our history books, it’s been taught that it’s a land of savages and people who have no regard for humanity or God,” said the pastor, whose church is affiliated with the Presbyterian Church (USA). “This movie conveyed a deep connection to spirituality and the ancestors and how one cannot lead without that kind of spirituality and a superhero himself is very in tune with the ancestors and the creator of the universe.”

Leaders of predominantly black churches were not the only people of faith who wanted to get young people into the theaters for the popular movie.

The Rev. Jacqui Lewis, the African-American pastor of Middle Collegiate Church in New York City, said her congregation’s white youth director took a multicultural group of teens to see “Black Panther” on Feb. 15 and they have since used Trinity United Church of Christ’s study guide.

“You know how teenagers are all about the superheroes, the kind of projection of the good we hope is in ourselves out on the screen,” said Lewis. “For that to be larger-than-life black folk was moving to our white children as well as our black children.”

Khaled Beydoun, an associate law professor at the University of Detroit Mercy School of Law, treated a group of 17 Muslim students to the movie on Friday (Feb. 23). The Muslim educator said “they were totally enthralled by the film.”

Given the significant percentage of Muslims in this country who are black, his goal was to help young nonblack Muslims bridge divides in a diverse city where schools are often segregated.

“If these young Arab, Muslim kids begin to see black people as members of their own, I think that can do a lot to erode racism in places like Detroit, but also nationally,” said Beydoun, author of the forthcoming “American Islamophobia.”

Cooper, of the AME Zion church in North Carolina, also noticed the movie’s universal themes of common humanity, which he said reminded him of the bond he has between “my brother in Christ, my sister in Christ” in his youth group.

“In my youth group, we loved the movie,” said Cooper, who planned to see it again. “It was the best movie I’ve seen.”

Posted by Councilman George L. Cook III at 5:36 AM