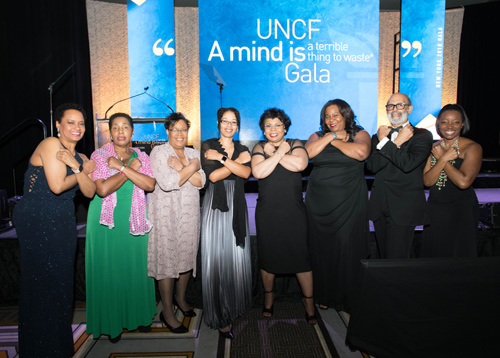 Close to $900,000 was raised at the recent UNCF “A Mind Is…” Gala honoring game-changing HBCU alumnus and White House correspondent April Ryan, Tony Award-winning director Kenny Leon and UNCF campaign contributor Oracle Corporation. More than 900 business, civic and education leaders attending the March 8 event. UNCF member-institution presidents, along with UNCF president and CEO Dr. Michael L. Lomax also attended. HBCU alum (Howard University) and “Entertainment Tonight” correspondent, A.J. Calloway served as master of ceremonies.
“HBCUs continue to produce leaders across all professions, including honorees April     Ryan, graduate of Morgan State; and Kenny Leon, graduate of Clark Atlanta,” said Lomax. “These honorees and our students attending HBCUs across the nation help change the narrative about HBCUs and address misperceptions and myths about them.”
The 2018 UNCF “A Mind Is…” Gala continued its tradition of honoring trailblazers for their game-changing education advocacy through partnerships with UNCF and through their own work. This year’s honorees, who through their sacrifices and determination, have led the charge in championing for a quality education for all, include White House correspondent April Ryan, who received the Shirley Chisholm Award for community service. Both Kenny Leon and the Oracle Corporation accepted the UNCF President’s Award.
“We could not be prouder of our partnership with UNCF, which spans more than 20 years,” said Hamidou Dia, senior vice president, Oracle. “During that period of time, we’ve donated over $13 million, sponsored countless interns, hired many students and have supported UNCF’s HBCU Innovation Summit. The foundation that you’ve laid since 1944 is remarkable. I’m sure that I speak for my colleagues at Oracle and beyond in saying that we’ve been the proud recipients of your graduates. They come to the table with new ideas, the courage to speak up, the skills to deliver, the fire to make a difference, and the commitment to reach back and help others. Simply put, you make our organizations and our country better.”
With the support of platinum sponsors Wells Fargo and Delta Air Lines, funds from the event help support UNCF programs and our 37 member institutions— colleges and universities that contribute to the regions and communities HBCUS have served for more than 100 years. And in the recent landmark study, HBCUs Make America Strong: The Positive Economic Impact of Historically Black Colleges and Universities--commissioned by UNCF’s Frederick D. Patterson Research Institute--UNCF shows the nation’s HBCUs generate $1.8 billion in economic impact annually; equivalent to a ranking in the top 200 on the Fortune 500 list of America’s largest corporations.
These institutions generate more than134,000 jobs for their local and regional economies—equal to the number of jobs provided by president’s awardee Oracle, one of the nation’s largest private employers.
To view images from the 2018 UNCF “A Mind Is…” Gala, visit: https://www.uncf.org/NewYork
To stay connected to UNCF throughout the year, please visit: UNCF.org
Follow us on social media @UNCF #UNCF
About UNCF UNCF (United Negro College Fund) is the nation’s largest and most effective minority education organization. To serve youth, the community and the nation, UNCF supports students’ education and development through scholarships and other programs, strengthens its 37 member colleges and universities, and advocates for the importance of minority education and college readiness. UNCF institutions and other historically black colleges and universities are highly effective, awarding nearly 20 percent of African American baccalaureate degrees. UNCF awards more than $100 million in scholarships annually and administers more than 400 programs, including scholarship, internship and fellowship, mentoring, summer enrichment, and curriculum and faculty development programs. Today, UNCF supports more than 60,000 students at more than 1,100 colleges and universities across the country. Its logo features the UNCF torch of leadership in education and its widely recognized motto, “A mind is a terrible thing to waste.”® Learn more at UNCF.org, or for continuous updates and news, follow UNCF on Twitter at @UNCF. #AMIGala