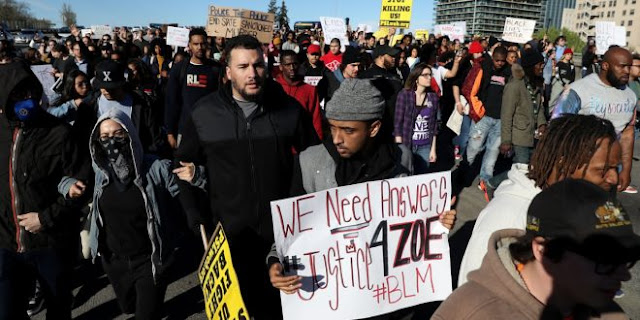 Protests erupted in Sacramento four days after Stephon Clark, an unarmed black man was shot by police in his grandmother's backyard. Demonstrators delayed the start of an NBA game as well as blocked entrance to an interstate highway.

Demonstrators blocked the entrance to an arena where an NBA game was scheduled Thursday, chanting "Black Lives Matter" and the name of the 22-year-old who was killed.

Most ticketholders weren't able to get inside, and the Sacramento Police said via Twitter that "no one else will be admitted to the #SacKings game."

Outside the arena, protesters linked arms and chanted at fans, "Join us or go home!"

The NBA and the Kings made the decision to close the doors, Sgt. Vance Chandler of the Sacramento Police Department told CNN. The game started with a delay and the team said it would refund the tickets.

Protesters began to disperse at night, and police made no arrests.

Protesters of police shooting shut down I-5 and block entry to Sacramento Kings game.

A dramatic day of protest Thursday over the shooting of Stephon Clark a young unarmed black man began at Sacramento City Hall, shut down Interstate 5 during rush hour.

The protest snarled traffic around central city freeways, with cars backed up nearly a mile south on I-5 toward Sutterville Road and on the westbound W/X freeway.

Around 5:30 p.m., southbound lanes reopened. It took another 30-plus minutes for protesters to leave northbound lanes. [SOURCE]

Demonstrators in Sacramento, California, gathered Thursday evening to protest the death of 22-year-old Stephon Clark, who was killed in his grandmother's backyard over the weekend after two police officers fired 20 shots at him.

A crowd of people went to Sacramento's City Hall, chanting phrases like "Stand up, fight back" and "No justice, no peace."

Black Lives Matter Sacramento is hosting the demonstration, according to the Facebook event titled "Turn Up - for [Stephon] Clark!"

"We are tired of Sacramento law enforcement killing us!" the event description reads. "We are tired of talking and meeting and sitting trying to convince our elected officials that there needs to be change!"[SOURCE]