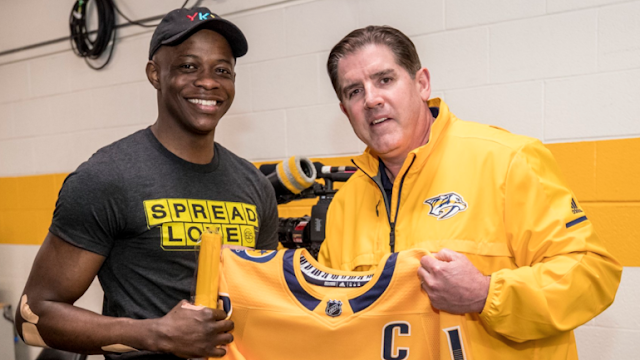 Although the current President of the United States could apparently care less about the heroic actions of an African American hero, the Nashville Predators took time to recognize and honor the bravery of James Shaw Jr. before Sunday's National Hockey League Game 2 against the Winnipeg Jets.

Last week, Shaw helped bring a deadly shooting at a Nashville Waffle House to an end when he was able to wrestle the gun away from the shooter. Four people died in the shooting, but police said that if it weren't for Shaw's actions -- he grabbed the hot barrel of the shooter's AR-15 and took it away -- the bloodshed could have been much more severe.

On Sunday night at Bridgestone Arena, Shaw was in attendance and received a hero's welcome. He participated in some pregame festivities outside the arena, including hammering the "Smash Car," which has become a "Smash Plane" for this series against the Jets.

Shaw was seen in a shirt that read "Spread Love" in the style of Waffle House lettering prior to the game, but inside the building he was presented with a customized jersey by Predators coach Peter Laviolette. That jersey had Shaw's name on the back, and a captain's 'C' on the front.

During the game, Shaw was recognized and welcomed with a standing ovation by the home crowd. Multiple first responders who assisted in the aftermath of the tragedy also received a similar welcome.