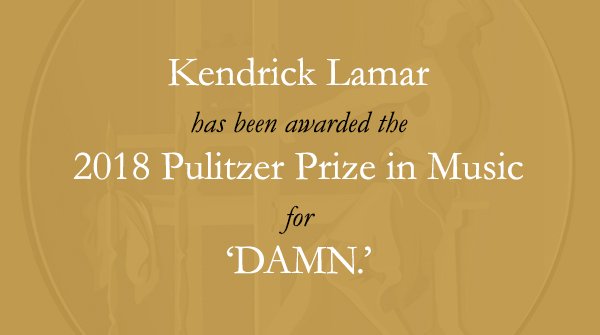 Kendrick Lamar has become the first rapper to win a Pulitzer Prize.

Kendrick Lamar has won the Pulitzer Prize for music, making history as the first non-classical or jazz artist to win the prestigious prize. The revered rapper is also the most commercially successful musician to receive the award, usually reserved for critically acclaimed classical acts who don't live on the pop charts.

The 30-year-old won the prize for "DAMN.," his raw and powerful Grammy-winning album. The Pulitzer board said Monday the album is a "virtuosic song collection" and said it captures "the modern African American life." He will win $15,000.

The Pulitzer board has awarded special honors to Bob Dylan, Duke Ellington, George Gershwin, Thelonious Monk, John Coltrane and Hank Williams, but a popular figure like Lamar has never won the prize for music. In 1997, Wynton Marsalis became the first jazz act to win the Pulitzer Prize for music.

The Pulitzer Prize is awarded for excellence in newspaper journalism, literary achievements, and musical composition