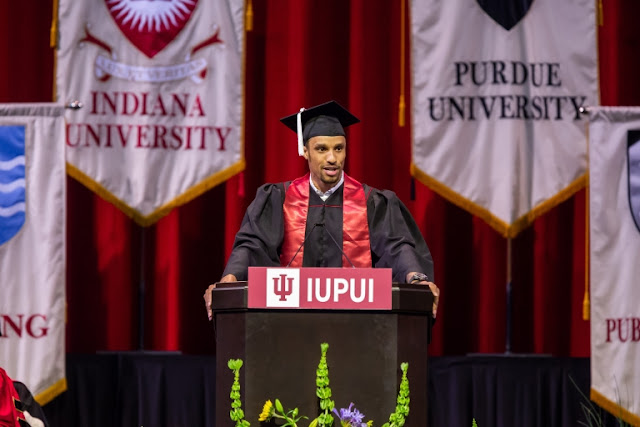 Cleveland Cavaliers guard George Hill was among this year's graduating class at Indiana University Purdue University at Indianapolis( IUPUI). Hill finished his degree from IUPUI's School of Liberal Arts this spring, nearly 15 years after he began his college studies.

Cleveland's starting guard was excused from practice on Saturday to receive his degree from IUPUI. As his Cavaliers teammates got in one last workout before heading to Boston for Game 1 of the Eastern Conference finals, Hill took part in graduation ceremonies at the school in Indianapolis.

The 32-year-old Hill was also one of two student speakers to address the new graduates.

In his commencement address, Hill honored all of his fellow graduates, recognizing that everyone had their own unique journey to get to this moment.

"I have been under the arena lights in some big moments in my life, but none has been bigger than this," Hill said. "For a lot of us, it wasn't easy to get here. It required much sacrifice and an incredible level of commitment, and there is no doubt we are so deserving of this recognition in this building."