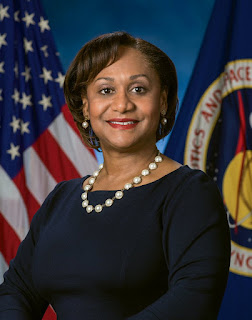 Wyche will assist Geyer in leading one of NASA’s largest installations, which has nearly 10,000 civil service and contractor employees – including those at White Sands Test Facility in Las Cruces, New Mexico – and a broad range of human spaceflight activities.

“Vanessa has a deep background at JSC with significant program experience in almost all of the human spaceflight programs that have been hosted here,” Geyer said. “She is respected at NASA, has built agency-wide relationships throughout her nearly three-decade career and will serve JSC well as we continue to lead human space exploration in Houston.”

Wyche recently served as director of the Exploration Integration and Science Directorate (EISD) and completed a detail as the JSC deputy director in February 2018.

“I am incredibly humbled to take on this role at JSC, and also excited to assist Mark with leading the home of human spaceflight,” Wyche said. “I look forward to working with the talented employees at JSC as we work toward our mission of taking humans farther into the solar system.”

Before joining JSC in 1989, Wyche worked for the Food and Drug Administration in Washington, D.C. She began her career with NASA in the Space Life Sciences Directorate as a project engineer. She has held several key center leadership positions including assistant center director, associate director of EISD and acting director of Human Exploration Development Support.

She also served in the Constellation Program as director of operations and test integration and in the Space Shuttle Program as a flight manager for several space shuttle missions. She was manager of the Mission Integration Office, and she completed a detail in the Office of the NASA Administrator.

A South Carolina native, Wyche is a graduate of Clemson University with both a bachelor of science in materials engineering and a master of science in bioengineering. Wyche is the recipient of two NASA Exceptional Achievement Medals and two NASA Outstanding Leadership Medals. Wyche is the first African-American to hold the JSC deputy director position.