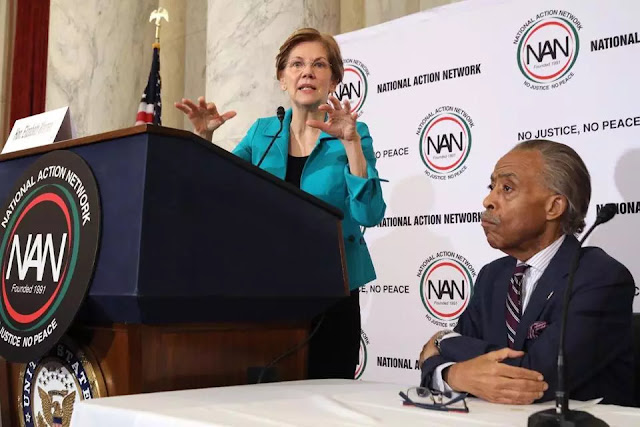 Sen. Elizabeth Warren is seeking to solidify her connection with African-American voters as she prepares to launch a potential presidential campaign amid criticism of her approach to race and identity.

The Massachusetts Democrat visited Morgan State University in Baltimore Friday, marking her third trip this year to a historically black college or university. It follows her widely panned October release of a DNA test meant to bolster her claim to Native American heritage. Her speech Friday offered an opportunity to regain her footing.

``I'm not a person of color,'' Warren said. ``And I haven't lived your life or experienced anything like the subtle prejudice, or more overt harm, that you may have experienced just because of the color of your skin. Rules matter, and our government _ not just individuals within the government, but the government itself _ has systematically discriminated against black people in this country.''

Warren could face additional pressure from Democrats to address race. Bakari Sellers, an attorney, Democratic political analyst and former South Carolina Democratic state representative, urged Warren to more publicly say that ``you were wrong in the way that you interpret and address race.''

``Having that moment of ignorance _ we all do, but we need to address the fact that we were wrong,'' he said. ``I love the fact that she's making attempts to make inroads with the African-American community, but her path is very narrow.''

Mo Elleithee, a veteran Democratic strategist and founding executive director of Georgetown University's Institute of Politics and Public Service, described Warren's outreach to African-American and other minority groups as even more vital to her potential campaign in light of the DNA test's poor reception.

``I think it has sort of knocked her off balance a little bit when it comes to issues of identity and minority outreach, broadly,'' Elleithee said, adding that ``the stakes are a little bit higher when you are one of the more recognized candidates at this early part of the process.''

Warren's work to spotlight racial as well as economic inequities is significantly more advanced than her fellow New England liberal icon, Sen. Bernie Sanders. The Vermont Independent is weighing his own 2020 Democratic campaign after struggling to break through with minority voters during his 2016 run.

The theme that Warren struck Friday _ that minorities don't get a level playing field in America _ is one she's long tackled. She drew acclaim from Black Lives Matter activists for a 2015 speech that acknowledged ``we have not made enough progress'' toward creating fairness and opportunity for African-Americans. She slammed the nation's criminal justice system as ``racist'' in August during a Q&A with Congressional Black Caucus Chairman Cedric Richmond, with whom she partnered again this week on affordable housing legislation backed by civil rights groups.

Democratic strategist Symone Sanders said Warren ``does a good job of authentically and honestly speaking not just to communities of color'' but also ``incorporating race into policy prescriptions.''

Sanders, a former campaign aide to the Vermont senator who is not currently working with any 2020 hopeful, said Warren's ``trip at the finish line'' on her DNA analysis isn't ``indicative of Elizabeth's Warren's understanding of communities of color, or of the type of presidential campaign she would run.''

Warren has ``proven that she has the skills to relate to an audience that is of color,'' Sharpton told The Associated Press. ``Her image before was a New Englander, academia-type policy wonk. And she's been able to, in her delivery, show some real passion toward things of concern like health care, criminal justice and the kinds of things that you don't expect a New England professorial type to show passion and connection.''

Richmond described ``the passion and the commitment'' that Warren displayed in remarks to their members that led to ``a natural relationship'' working on issues. Four CBC members introduced the House counterpart to Warren's housing legislation on Tuesday.

Richmond also took no issue with Warren's presentation of the story of her past: ``People are always going to look for the negative in no matter what you do. And I just think that she's very authentic, very open, and sometimes that's going to open you up for some criticism on how you did it, why you did it.''

DeJuana Thompson, a former DNC and Obama administration staffer and the founder of WokeVote, recalled that Warren was among the first people that she heard from following the work that her group did in Alabama to help turn out black voters in support of Democratic Sen. Doug Jones.

``She contacted us literally the day after we won and said, `I'm so proud, this is the kind of work that we need to be doing across the country,'' said Thompson, who is not currently supporting any of the prospective candidates. ``It felt genuine, it felt authentic, and it felt like she had been following and watching our work, and I had no idea.''

Aimee Allison, the founder of She The People, an advocacy group focused on political leadership for women of color, called Warren's efforts on race ``authentic'' but candidly described the DNA test release as ``a big stumble,'' adding that the senator's challenge going forward is similar to the one facing other white presidential hopefuls.

``As a white candidate for president, the demographics and the politics and I think zeitgeist really calls for a difference kind of leader than before,'' Allison said, adding that candidates who can't deftly address race ``I don't believe will make it through at all.''