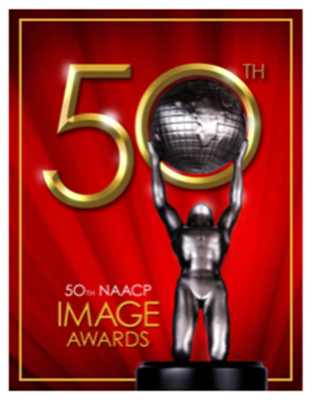 LOS ANGELES, CA (January 3, 2019) – The 50th NAACP Image Awards will air LIVE on TV One, a division of Urban One, Inc., on March 30, 2019. For the first time ever, the telecast will take place from the Dolby Theatre in Hollywood, California. The announcement was made today by NAACP National Board of Directors Chairman Leon W. Russell, NAACP President and CEO Derrick Johnson, Chief Executive Officer, Urban One, Inc. & Chairman/CEO, TV One Alfred Liggins and TV One General Manager Michelle Rice.
The NAACP Image Awards celebrates the accomplishment of people of color in the fields of television, music, literature, and film and also honors individuals or groups who promote social justice through creative endeavors. The upcoming telecast, the 50th Anniversary of the NAACP Image Awards, will also spotlight the significant contributions of the NAACP and the impact the organization has had on our community and country.
In addition to the live telecast, TV One will also air special programming honoring this year’s nominees and spotlighting significant moments. The network will provide promotional support for both programs on TV One, Radio One and Reach Media, Interactive One, and via a multi-platform marketing campaign.
“The 50th Anniversary of the Image Awards represents a major milestone in bringing visibility to the outstanding achievements of African Americans in entertainment, literature, and arts, as well as the NAACP’s ongoing advocacy for equality of opportunity in our society without regard for race,” said the NAACP’s Derrick Johnson. “We are sincerely grateful for our continued partnership with TV One and look forward to working with them on the 50th anniversary show, added Johnson.
“We are honored to continue our partnership with the NAACP to remain the television home for the Image Awards,” said Liggins of TV One. “The NAACP 50th Anniversary Image Awards is an important milestone for the African American community and we couldn’t be more thrilled to offer this special programming once again to our viewers. As we prepare to celebrate the network’s 15th anniversary next year, we look forward to this very special night.”
“African Americans have had a tremendous impact on society and culture, a fact that we’re excited to celebrate with the telecast of the 50th NAACP Image Awards on TV One,” said Michelle Rice, General Manager. “As we honor this year’s biggest achievements and the incredible 50 year legacy of the NAACP Image Awards, we’re proud to continue the network’s mission to represent the richness of the Black experience.”
The multi-cultural show is one of the most respected events of its kind and is well attended by many of the top names in the entertainment industry. Airing on MLK day last year, the 49th NAACP Image Awards posted strong year-over-year growth across most demos: Households (+15%), P25-54 (+21%), P18-49 (+44%), W18-49 (+20%), and Total Viewers 2+ (+10%). And, for the night, the special was a Top 5 Cable Telecast among African Americans (Households, AA W25-54, and AA P2+). Additionally, the show has reached 2.4 Million Total Unique Viewers 2+ since airing in January 2018.
TV One also delivered a strong performance on its social platforms during last year’s awards telecast, with #ImageAwards trending #2 nationally beginning at 9 p.m. ET and continuing in the Top 5 until 3 a.m. ET. The network generated more than 305 million impressions on Twitter using #ImageAwards and #RepresentTheDream, while traffic to the network’s website tvone.tv increased by +59% in page views. The site saw an increase of +25% for all NAACP Image Awards related content and delivered 183,000 page views (from 10/1/2017 – 1/17/2018 vs. 10/1/2016 – 2/14/2017) over 2017.
Previous telecasts included stellar talent such as Oprah Winfrey, Will Smith, Taraji P. Henson, Viola Davis, Gabrielle Union, Kerry Washington, Anthony Anderson, Sterling K. Brown, Mandy Moore, Halle Berry, Common, Dwayne Johnson, Steve Harvey, Audra Day, John Legend, Tracee Ellis Ross, David Oyelowo, Laverne Cox, Octavia Spencer, Issa Rae, Chadwick Boseman, Terry Crews, Yara Shahidi, Danai Gurira, Isaiah Washington, Jacob Latimore, Jay Pharoah, Jemele Hill, Josh Gad, Loretta Devine, Michael B. Jordan, Sylvester Stallone, Jurnee Smollett, Meta Golding, Michael Smith, Tyler James Williams, Ava DuVernay, Chadwick Boseman, and many more.
The production team will be returning including Executive Producers Reginald Hudlin and Phil Gurin, Tony McCuin as Director, Byron Phillips as Co-Executive Producer, and Robin Reinhardt as Talent Producer.
For all information and latest news, please visit the official NAACP Image Awards website at www.naacpimageawards.net.
Nominations for the “50th NAACP Image Awards” will be announced February.
FB: /naacpimageaward | Twitter: @naacpimageaward (#ImageAwards)