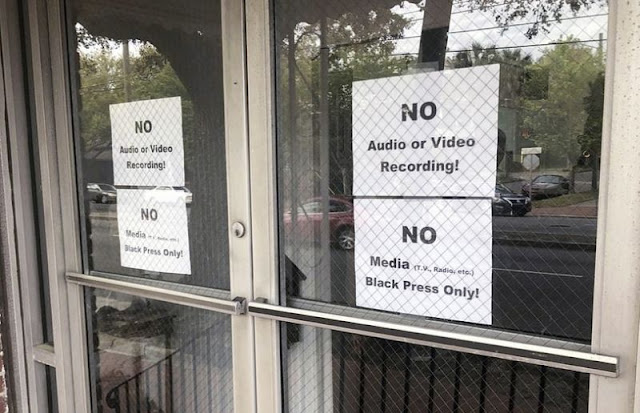 Organizers of a meeting to discuss an upcoming mayoral race in Georgia barred reporters from attending — unless they were African-American.

The Wednesday meeting at a church in Savannah was held to try to unite the city's black community behind a single candidate for mayor in the Nov. 5 election. Signs at the door said "Black Press Only!"

White reporters were denied entry, while at least two black reporters and the publisher of a local African-American newspaper were allowed inside, the Savannah Morning News reported . Television cameras and recording devices were also prohibited.

The newspaper said the Rev. Clarence Teddy Williams, who organized the meeting, declined to discuss the entry policy.

Van Johnson, a Savannah city councilman and one of three black mayoral candidates to have announced campaigns so far, attended the Wednesday meeting at Bolton Street Baptist Church. Johnson said afterward he relayed "my vision for an inclusive Savannah, a progressive Savannah."

Asked by a local TV station about only black reporters being allowed inside, Johnson said: "It's not my meeting. Again, I was asked to come give a statement, and so I came and I gave a statement."

Regina Thomas, a former Georgia state senator and one of the incumbent mayor's black challengers, skipped the church gathering Wednesday. She said the meeting appeared divisive and was scheduled too early in the campaign. The deadline for candidates to sign up for the race is Aug. 23. Thomas said she also had a scheduling conflict: her Bible study group met Wednesday night.