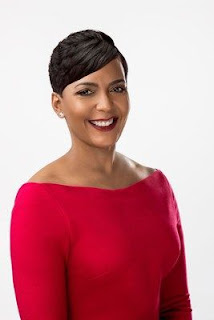 The Honorable Keisha Lance Bottoms, current mayor of Atlanta, has been named keynote speaker for the Spelman College 132nd Commencement ceremony. The 60th Mayor of Atlanta will address 474 graduates in the Class of 2019 and 9,000 of their family and friends on Sunday, May 19, 2019, at 3 p.m., at the Georgia International Convention Center in Atlanta. Mayor Bottoms will also receive the National Community Service Award in recognition of her service as a lifelong public servant and commitment to addressing local, state and national issues.

Mayor Bottoms is the only mayor in Atlanta's history to have served in all three branches of government, serving as a judge and city councilmember before being sworn in as mayor. Leading with a progressive agenda focused on equity and affordable housing, Mayor Bottoms serves as chair of the Community Development and Housing Committee for the United States Conference of Mayors.

Only the second woman to be elected to Atlanta's highest office, Mayor Bottoms has demonstrated her courageous leadership through initiatives like the citywide elimination of cash bail bonds, the closure of the Atlanta City Detention Center to ICE detainees, and the launch of Atlanta's financial transparency platform – Open Checkbook. During her time on city council, she launched Invest in Southwest , a 360-degree urban planning initiative with the goal of revitalizing and expanding economic development within the Southwest Atlanta community. She also authored panhandling legislation, which combined empathy with enforcement, and resulted in offenders receiving often-needed social services to help break the cycle of recidivism.

"Atlanta is fortunate to have such a dynamic leader as Mayor Keisha Lance Bottoms, who has had a tremendous impact on the city, in particular on the Westside, where Spelman is located," said Spelman President Mary Schmidt Campbell, Ph.D. "She stands as an example for Spelman students of how to effectively lead the country's bedrock for civil and human rights, while navigating complex issues, prioritizing civic engagement and advancing Atlanta's progress in global commerce and equity. We look forward to Mayor Bottoms sharing her experience with the class of 2019."

Under Mayor Bottoms' leadership, the City of Atlanta recently led the successful staging of Super Bowl LIII, which included unprecedented community benefits – a $2.4 million renovation of John F. Kennedy Park on Atlanta's Westside, more than 20,000 trees planted throughout the community and the seamless coordination of 40 federal, state and local public safety agencies.

Mayor Bottoms has volunteered and served on the board of numerous community organizations, including The Children's School, the Firefighters' Pension Fund, the Andrew and Walter Young YMCA, the YWCA of Atlanta, Cure for Childhood Cancer and Central Atlanta Progress. She has been a member of the National Center for Civil and Human Rights – Women's Solidarity Society and also served on the board of Families First, where she often shared her personal story of adoption and advocates on behalf of adoption and foster care.

"Spelman College is a beacon of excellence across the globe and I am honored to stand among the many fearless women who have graced this space to share life lessons with the graduates as they journey into their next chapter," said Mayor Keisha Lance Bottoms. "I am equally grateful to receive the 2019 National Community Service Award. Thank you, Spelman College, for the thoughtfulness in this recognition."