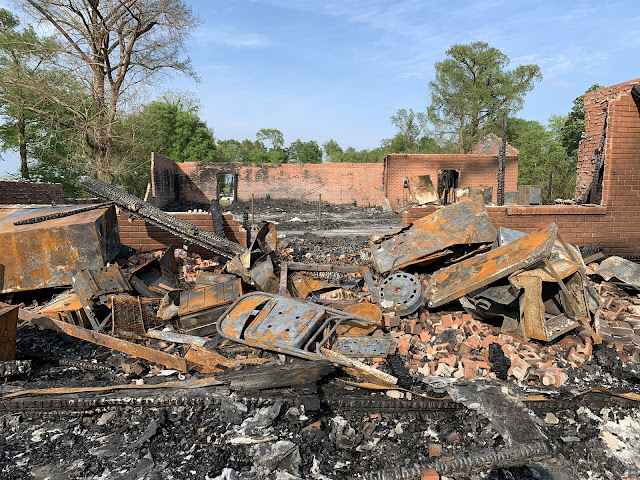 Federal hate crime charges have been filed against the son of a sheriff's deputy who was arrested in connection with a string of fires at three historically black churches in Louisiana, federal prosecutors announced Wednesday.

Holden Matthews, 21, faces three counts of intentional damage to religious property, which constitute hate crimes under the Church Arson Prevention Act. He was also charged with three counts of using fire to commit a felony, the Justice Department said in a news release after the federal indictment was unsealed.

Holden Matthews, 21, was booked into the St. Landry Parish Jail on three counts of simple arson of a religious building.St. Landry Parish Sheriff Dept. The indictment says the fires were set "because of the religious character" of the properties.

The fires at the three churches, which were all started by gasoline and set from late March to early April, unnerved churchgoers in the St. Landry Parish region — conjuring up images of attacks on black churches in the South during the civil rights movement, and more recently, during the 1990s.

"Churches are vital places of worship and fellowship for our citizens and bind us together as a community," David Joseph, the U.S. attorney for the Western District of Louisiana, said in a statement. "Our freedom to safely congregate in these churches and exercise our religious beliefs must be jealously guarded. Today we are one step closer to justice for the parishioners of these churches and the St. Landry Parish communities affected by these acts."

Matthews already faced state charges in the church fires, including violating Louisiana's hate crime law. He has pleaded not guilty in that case.