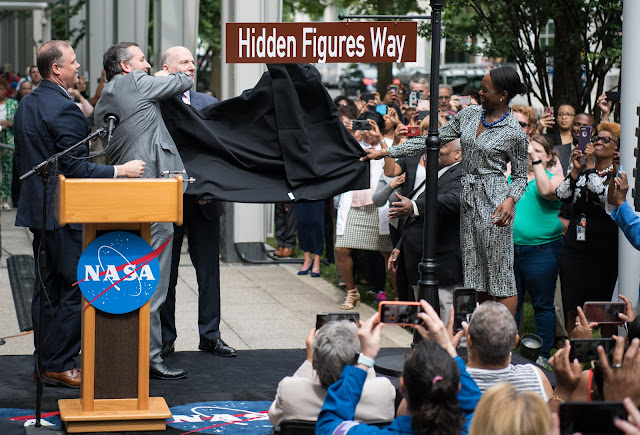 Visitors to NASA’s headquarters in Washington, D.C. will forevermore be reminded of the African-American women who were essential to the success of early spaceflight.

The renaming honors Katherine Johnson, Dorothy Vaughan, and Mary Jackson, who were featured in Shetterly’s book – and the subsequent movie – Hidden Figures, as well as all women who honorably serve their country, advancing equality, and contributing to the United States space program.

“I just want to say these were the three hidden figures in a very prominent book that became a magnificent movie that started a movement that brought all of us here today,” Bridenstine said. “Here we are, 50 years after the landing of the Apollo 11 Moon lander, celebrating those figures who were, at the time, not celebrated.”

Members of the Johnson, Jackson and Vaughan families, as well as Christine Darden, a mathematician who worked alongside these esteemed women at NASA, were surrounded by a large crowd gathered at the corner of 3rd and E Street SW to share in the momentous event.

“A street sign is a piece of metal, that’s under the wind, sun, rain, snow. But a street sign’s a lot more than that,” Cruz said. “Because for years, and then decades, and then centuries, when little girls and little boys come to see NASA, they’re going to look up and see that sign, and they’re going to say ‘Hidden Figures? What’s that? What does that mean?’ And that, in turn, is going to prompt a story – a story about the unlimited human potential of all of us.”

Mendelson, who introduced the renaming bill for the city council in September 2018, also noted the integral role NASA’s human computers of the Apollo era played in developing America’s space program, and the important lessons we take from history, particularly lessons on race in this country.

“It’s not just a story of individuals but it’s also a story of, and acknowledges, the racism in this country and how we still struggle to deal with that and to overcome it,” he said.

The story that sparked the movement Bridenstine spoke of was shared with the world by an author who has her own close ties to NASA. Shetterly’s father, whose birthday also was Wednesday, spent his entire career at NASA’s Langley Research Center in Hampton, Virginia, as an atmospheric research scientist.

“Naming this street Hidden Figures Way serves to remind us, and everyone who comes here, of the standard that was set by these women, with their commitment to science and their embodiment of the values of equality, justice and humanity,” Shetterly said. “But, let it also remind us of the Hidden Figures way, which is to open our eyes to contribution of the people around us so that their names, too, are the ones that we remember at the end of the story.”