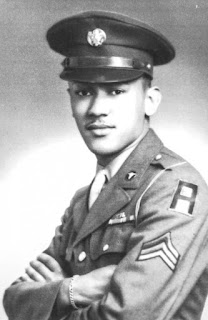 The Congressional Black Caucus (CBC) is pushing for an African American soldier to be posthumously awarded the Medal of Honor for his actions on D-Day.

The CBC, along with Sen. Chris Van Hollen (D-Md.), sent a letter to acting Army Secretary Ryan McCarthy Wednesday asking him to open a formal review of Cpl. Waverly B. Woodson Jr., an Army medic assigned to the 320th Barrage Balloon Battalion. They said he continued to work to save lives for 30 hours on Omaha Beach after he was wounded.

“Cpl. Woodson went above and beyond the call of duty by spending 30 grueling hours saving the lives of dozens, if not hundreds, of his fellow soldiers,” the letter reads. “Cpl. Woodson was a war hero who has been inadequately recognized for his actions on D-Day.”

The letter’s signatories say he was not awarded for his bravery “because of the color of his skin.”

“We respectfully ask the Army to rectify this historic injustice and appropriately recognize this valorous Veteran with a posthumous recommendation for the Medal of Honor,” they wrote.

Read the letter below: