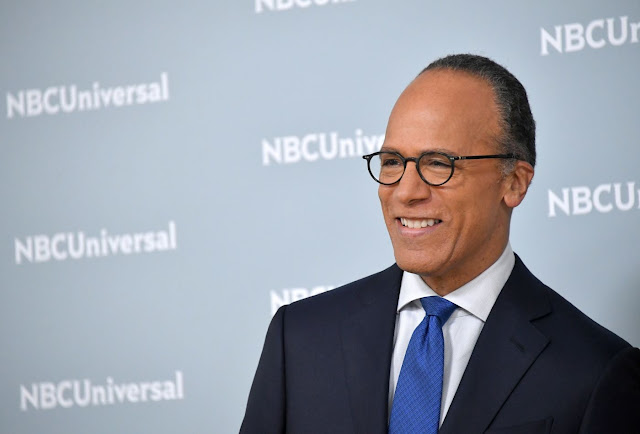 Lester Holt, the award-winning journalist and anchor of “NBC Nightly News with Lester Holt,” will be the 2019 recipient of the Walter Cronkite Award for Excellence in Journalism, Arizona State University officials announced today.
Holt will receive the 36th-annual Cronkite Award from the Walter Cronkite School of Journalism and Mass Communication, which has honored a journalism luminary with the award since 1984. The ceremony will be in Phoenix on Nov. 4, Cronkite’s birthday. The late CBS News anchor, the namesake of the school who gave out the award for decades, would have been 103.
Holt has anchored the flagship NBC broadcast since 2015, following eight years as anchor of the newscast’s weekend edition and 12 years as co-anchor of “Weekend TODAY.” He also leads NBC’s special reports, major breaking news and primetime political coverage and has served as principal anchor of “Dateline NBC” since 2011. Just recently, he was one of the moderators for the first Democratic presidential debate of the 2020 election cycle. According to Nielsen Media Research, it was watched by more than 18 million viewers on television alone, making it the most-watched Democratic debate ever.
His work has been recognized with multiple Emmy Awards, a Robert F. Kennedy Journalism Award and the Fred Friendly First Amendment Award. In 2016, he was named Journalist of the Year by the National Association of Black Journalists.
“Lester Holt is a fantastic role model for our students and all journalists for his insightful, caring, fact-based journalism and stories that focus on the impact of major news events on everyday Americans,” said Cronkite Dean Christopher Callahan. “He embodies the cherished news values of accuracy, honesty, fairness and objectivity championed by Walter throughout his long career.”
Known for his outstanding work in the field, Holt has anchored the evening newscast and reported on breaking news events from around the globe. Recently, he anchored from Normandy for the 75th anniversary of D-Day, and last year he reported from the Korean Peninsula on the growing tensions between the United States and North Korea just weeks before the 2018 Winter Olympics.
Over the past several years, Holt has reported from Manchester, Brussels and Paris on the terrorist attacks that took place across Europe. He anchored from South Africa during the Nelson Mandela memorial service, reported from Cairo on the political and civil unrest in Egypt during the Arab Spring, covered the 2010 earthquake and nuclear crisis in Japan, and reported on the immediate aftermath of the devastating earthquake in Haiti. Holt was also on the ground in Hungary during the migrant crisis in Europe in 2015 and anchored from Cuba numerous times, including during the opening of the U.S. embassy, President Barack Obama’s visit and the funeral of Fidel Castro. Additionally, he was embedded with U.S. Forces reporting on the ongoing military operations in Afghanistan in 2010 and 2012.
One of Holt’s trademarks is his on-the-ground reporting focused on everyday people. He reported in Texas and Florida following the 2017 hurricanes and from Las Vegas on the Mandalay Bay shooting, providing first-person accounts of the devastation. In January 2017, he traversed the nation to talk with Americans about their hopes for the next four years. Holt has also covered more than a dozen natural disasters, including the aftermath of Hurricane Katrina in 2005.
In 2016, he was selected to moderate the first presidential debate, which is still the most-watched debate in U.S. history. He conducted one-on-one interviews with Presidents Donald Trump and Obama and the top presidential candidates leading up to the November 2016 elections. Holt has also covered every Olympics for NBC News from the ground since the 2002 Winter Olympics in Salt Lake City.
Holt started at NBC News in 2000, anchoring “Newsfront” and then “Lester Holt Live” on MSNBC and later served as the cable network’s lead anchor for major news events. He rose to co-anchor of “Weekend TODAY” in 2003 and in 2007 was named weekend anchor of “NBC Nightly News.”
After studying government at California State University in Sacramento, he started his television journalism career in 1981 as a reporter at WCBS-TV in New York. The following year he moved to Los Angeles to report for KCBS-TV (then KNXT) before returning to WCBS in 1984. He moved to Chicago in 1986, where he served for 14 years as the afternoon and evening news anchor for WBBM-TV.
The first recipients of the Walter Cronkite Award for Excellence in Journalism were CBS founder William Paley and former CBS News President Frank Stanton in 1984. Other past award recipients include TV news anchors Tom Brokaw, Diane Sawyer and Scott Pelley; newspaper journalists Ben Bradlee, Helen Thomas and Bob Woodward; and media executives Katharine Graham, Malcolm Forbes and Al Neuharth.
The Cronkite School, named in Cronkite’s honor in 1984, prepares the next generation of journalists in both the time-honored fundamentals embraced by Cronkite and the skills necessary to thrive as journalists in the digital age. Some 70 full-time faculty include media scholars and top professionals, including five Pulitzer Prize winners.
Housed in a state-of-the-art media complex in downtown Phoenix, the school has been featured in The New York Times, The Times of London and USA Today as a leader in 21st century journalism education and innovation.
The Cronkite School also is the home of Arizona PBS, which serves as a journalistic teaching hospital for hundreds of students who work under 15 full-time faculty in professional immersion programs that include a nightly television news broadcast on Arizona PBS, digital reporting bureaus in Phoenix, Washington and Los Angeles, business, borderlands and health care reporting units, a digital innovation and entrepreneurship lab, a digital production desk, an audience engagement lab, the Carnegie-Knight News21 multi-university reporting program, and the new Howard Center for Investigative Journalism.