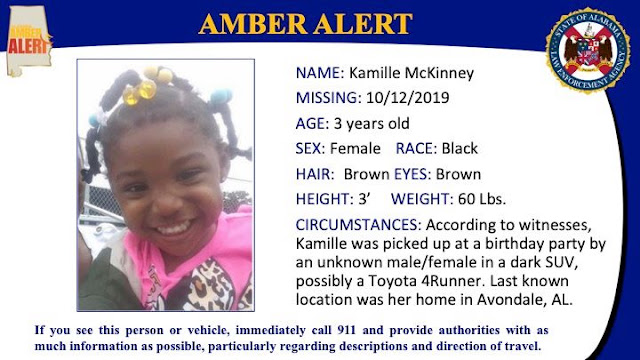 An Amber Alert is in effect for a child who is described as being in "extreme danger."

The Birmingham Police and the Alabama Law Enforcement Agency is asking the public for help in looking for Kamille McKinney who is nicknamed "Cupcake."

Investigators said she is a 3-year-old girl who is three feet tall and weighs 60 pounds. She has brown eyes and black hair and was last seen wearing a pink t-shirt with a Minnie Mouse leopard print design, leopard print shorts and yellow, white and blue hair bows.

She was last seen at the Tom Brown Village housing community around 8:30 p.m. on Saturday, October 12.

ALEA troopers said she may have been abducted by a man and a woman "traveling in a dark colored black or blue SUV, possibly an older model Toyota 4 Runner with rims and a tan protruding bumper."

On Sunday, the Housing Authority of the Birmingham District issued a statement on the search, which said in part, "We'd like [Kamille's] family to know that they are in our thoughts and we pray this unimaginable situation will end very soon with the safe return of their little girl."