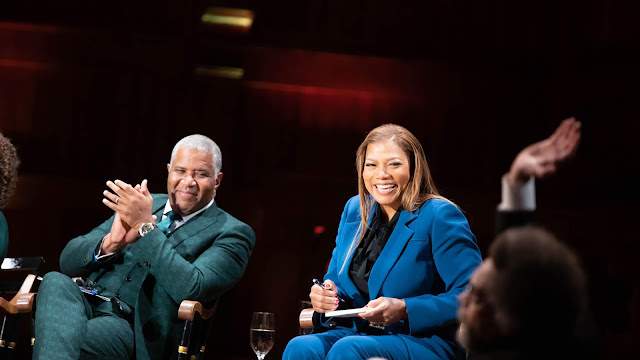 Entertainer Queen Latifah and Robert F. Smith the entrepreneur who announced that he would pay the college loans of more than 400 Morehouse College students who graduated in May are among W.E.B. Du Bois Medal recipients. The Du Bois Medal celebrates black excellence and opportunity.

“Understand that there will be times when you will have to stand alone. There will be no one else that will believe in your dream,” Queen Latifah, hip-hop artist, actress, and medal recipient, told a packed audience Tuesday evening at Sanders Theatre. “There are plenty of people who told us we will never be where we are today … but we don’t believe those people. You have to be strong and be courageous and just know that if you believe in it, it’s going to happen. Don’t give up. Do not quit. Fight for it.”

In a moving speech, Smith — the founder, chairman, and CEO of Vista Equity Partners, a firm that manages equity capital worth upwards of $50 billion — recalled how his upbringing and community inspired him to succeed for those who didn’t have the opportunities he did, and to open doors to success for others. Of his $34 million gift to the 2019 graduates of Morehouse, he said, “To me that’s my job. It is to liberate the human spirit.”