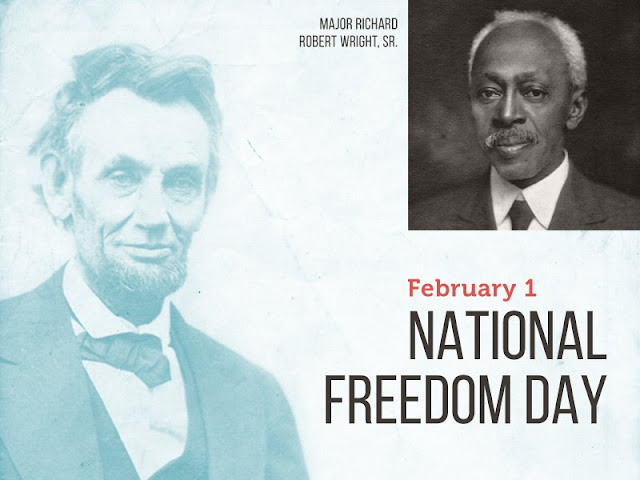 National Freedom Day is an observance in the United States that honors the signing of a resolution that proposed the 13th amendment of the nation's constitution on February 1, 1865. Abraham Lincoln, who was the president at the time, signed the resolution to outlaw slavery. This anniversary is annually observed on February 1.

Major Richard Robert Wright Senior, a former slave who founded the National Freedom Day Association, played a crucial role in creating the observance. Major Wright was deemed as a community leader in Philadelphia and was active in education, the media, business and politics. He hoped to see a day that would be dedicated to celebrating freedom for all Americans.

The first commemoration of such a day took place on February 1, 1942, although it was not made into law yet. A tradition of laying a wreath at Liberty Bell also began. On June 30, 1948, President Harry Truman signed a bill to proclaim February 1 as the first official National Freedom Day in the United States.

Many people in the United States reflect on and remember the importance of freedom on National Freedom Day. The United States president may annually issue a proclamation on the day. Some educational institutions may incorporate themes relating to National Freedom Day as part of class discussion, readings, and other learning activities that explore the importance of the day and its history.

Information on local celebrations or events that center on National Freedom Day may be publicized prior to and on February 1. For some people, it is a time to promote good will, equality, and to appreciate freedom. Wreath-laying at the Liberty Bell has also been a tradition to mark National Freedom Day for many years. Other events include annual breakfasts, luncheons, musical entertainment, film screenings, and literature meetings that explore the theme about freedom.