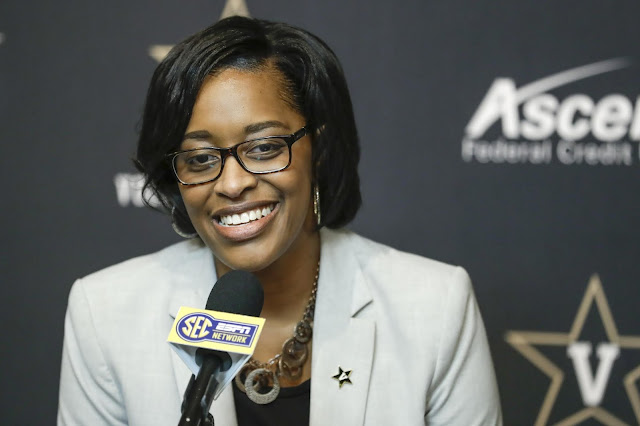 The decision firmly cements Lee’s place in Vanderbilt and college sports history. Lee is Vanderbilt’s first female athletic director and the first African American woman to head a Southeastern Conference athletics program. The appointment places her in the upper echelon of college athletics as one of only five women currently leading a Power Five program.

Candice is perfectly positioned to lead our athletics program to new heights of success on and off the field of play. She has the drive, creativity and perseverance to help elevate our student-athletes and the entire Vanderbilt Athletics program,” said Incoming Chancellor Daniel Diermeier. “The progress that Vanderbilt Athletics has achieved in recent years, and our very high aspirations for the future, are grounded in the university’s commitment both to academic excellence and to preparing our student-athletes to play and win in one of the most, if not the most, competitive conferences in the country. Candice is the living embodiment of these values and aspirations.”

“We will look back and see this decision as a major turning point for Vanderbilt Athletics and our entire university. Most importantly, Candice leads by example as an alumnus and former athlete—showing our student-athletes that the university’s commitment to ensuring they are successful on and off the field can pay dividends in their lives after Vanderbilt,” said Interim Chancellor and Provost Susan R. Wente. “Candice hit the ground running after being appointed interim athletic director earlier this year, and I am confident she will continue to deliver the best opportunities possible for our student-athletes.”

As athletic director, Lee will continue to work with the Vanderbilt Athletics leadership team and coaching staff and collaborate directly with the chancellor on implementation of the university’s Strategic Plan for Athletics, which outlines the university’s vision for developing the best student-athlete experience in college athletics.

“I am incredibly honored to lead the Commodores, and I could not have been in this position without the support of the university’s leadership, our dedicated coaches and staff, and all of Commodore Nation,” Lee said. “There are challenges ahead and much uncertainty about what college athletics can and should look like during a pandemic, but I firmly believe that anything is possible if we all work together.

My priority, and the university’s priority, continues to be examining everything we can do to support our student-athletes and ensure their safety and well-being. We also continue to prepare for the future—determining and establishing the conditions our student-athletes need to compete and succeed at Vanderbilt and beyond.”

Lee, who has been nationally recognized as a rising star in college athletics, was named to Sports Business Journal’s “Power Players: College Sports” list in 2019—distinguishing her as one of “the best thinkers, problem-solvers and dealmakers in college sports” and as someone who “will play a distinctly important role in its future.” In 2018, Adidas named Lee to its prestigious “NEXT UP” class, comprising “senior-level administrators, handpicked by some of the most respected athletic directors in the industry, who are believed to be ready to take the next step as athletic directors in their own right.”

“This is a tremendous opportunity for Vanderbilt and for Candice—someone who has risen through the ranks at the university and with whom I have had the pleasure to work with for a number of years. I think Commodore athletics can only benefit from her leadership,” John Ingram, chair of the Vanderbilt Board of Trust Athletics Committee, said.

Along with her roles as associate vice chancellor and deputy athletic director, Lee has served as the department’s senior woman administrator since 2004. As deputy athletic director, she oversaw the day-to-day operations of the athletics department and also served as the sport administrator for the football and women’s basketball programs. Lee formerly served as a member of the NCAA Women’s Basketball Rules Committee, is the former chair of the NCAA Division I Women’s Lacrosse Committee and a former chair of the SEC Senior Woman Administrators.

In September 2019, Lee was named a 2019-20 fellow of the Tennessee Independent Colleges and Universities Association’s Pressnell Executive Leadership Institute. She is a member of the 2012 class of Leadership Nashville, the 2012 Vanderbilt Leadership Academy, the YWCA of Middle Tennessee Board of Directors and the SEC Executive Committee.

As a captain and four-year letter winner for Vanderbilt’s women’s basketball team, Lee graduated with a bachelor of science degree in human and organizational development in 2000. She also received her master’s degree in counseling from Vanderbilt in 2002, and in 2012, Lee earned her doctorate from Vanderbilt in higher education administration.

Lee has been instrumental in Vanderbilt Athletics’ success in proving that excellent academics and excellent athletics can coexist. In 2019, Vanderbilt finished with an overall NCAA Graduation Success Rate of 97, the highest of any SEC program for the fifth straight year. This year, student-athletes also exceeded a 3.0 grade-point average for the 15th straight year. The recently released NCAA Academic Progress Rates for the 2018-19 academic year showed seven of Vanderbilt’s varsity programs earning perfect—and nation-leading—scores.