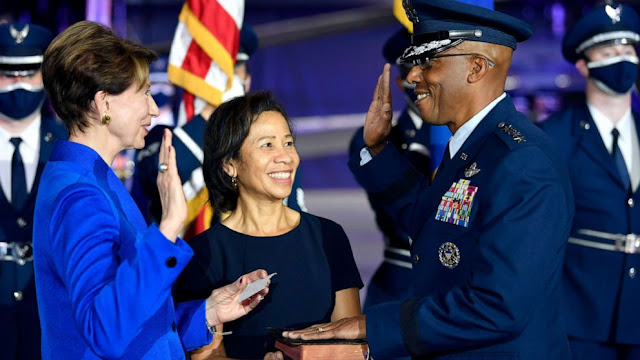 Gen. Charles "CQ" Brown, Jr. became the new Air Force chief of staff on Thursday, making history as the first African American to lead one of the military services.

Brown succeeded Gen. David Goldfein, as the Air Force's 22nd chief of staff at a ceremony at Joint Base Andrews, where the significance of the moment was not lost on Brown.

"This is a very historic day for our nation, and I do not take this moment lightly," he said in remarks to an audience of VIP's at one of the base's spacious hangars.

"Today is possible due to the perseverance of those who went before me, serving as an inspiration to me and so many others," he said.

He mentioned those forebears as the Tuskegee Airmen, the trailblazing World War II fighter unit that was made up entirely of African Americans.

Read more: History made as first African American general leads one of the military services

Posted by Councilman George L. Cook III at 6:39 AM