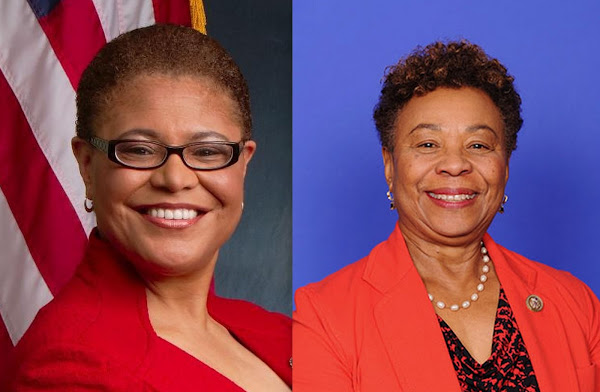 The California Legislative Black Caucus met via Zoom with other Black leaders Friday and urged Governor Gavin Newsom to appoint an African American woman to fill the U.S. Senate seat that will be vacated when Kamala Harris takes office as the first African American female Vice President of the United States.

The group unanimously recommended either Karen Bass or Barbara Lee as appointees to the California Senate seat vacated by Harris.

Karen Bass formerly served in the California State Assembly for six years, the last two as speaker. As a Los Angeles native, Bass is currently the Congresswoman for the 37th congressional district of California.

As a legislator, Lee authored almost 70 bills and resolutions that were signed into law by then Republican Governor Pete Wilson. These different pieces of legislation addressed a wide variety of issues ranging from public safety to environmental issues.

In 1995, Lee authored the California Schools Hate Crimes Reduction Act, which affords protection from hate crimes to all students in public schools regardless of their race, gender identity, sexual orientation, or other. During her time in the State Senate, Lee was a strong advocate for African Americans, and for women.

In 1998, Lee was elected as Congresswoman for California’s then 9th district where she took controversial stances on many different issues. She has been a strong advocate for legislation to end poverty, ending the HIV epidemic and the only member of Congress to vote against the authorization of use of force following the September 11 attacks.

As Dr. Shirley Weber noted in her remarks Friday morning, both women “have confidently built strong coalitions across diverse communities, and will do so in the senate.”