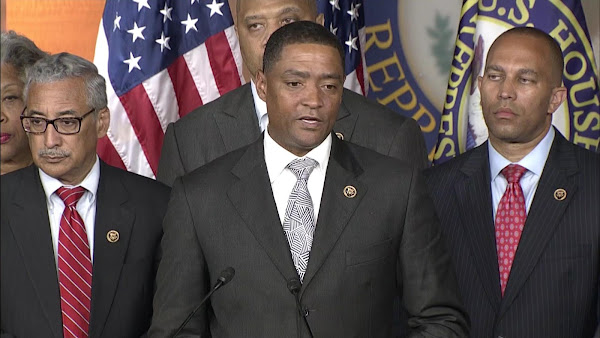 The Congressional Black Caucus is delighted to congratulate our very own Member, Representative Cedric Richmond, on his historic appointment to serve in the Biden Administration. As the Director of Public Engagement and Senior Advisor to President-Elect Joe Biden, Rep. Richmond will be the most senior African-American serving in the incoming administration. This appointment is a clear recognition of both the critical role Rep. Richmond played in the Biden Campaign as national co-chair, as well as the significance of Black voters in delivering a decisive victory for Joe Biden. Black communities continue to bear the brunt of a global pandemic, economic recession, and racial inequities. Now more than ever, our communities deserve champions for our causes at all levels of government, including in the highest office of the land. Rep. Richmond will continue to be an arduous advocate for Black communities and his long record of service is proof of what is to come in the Biden Administration.

Congressman Richmond has tirelessly served the 2nd district of Louisiana since 2011, after being one of the youngest legislators to ever serve in the Louisiana State Assembly when he was elected shortly after his 27th birthday. During that time, he worked in a bipartisan fashion to deliver results to his constituents, including long-term federal relief from the devastation of Hurricane Katrina and other natural disasters. Rep. Richmond currently serves as Assistant Majority Whip, assisting the Democratic Caucus in advancing key priorities such as restoring the Voting Rights Act and passing the George Floyd Justice in Policing Act. He recently moved to the prestigious House Ways and Means Committee, where federal policies related to tax and social safety net programs are set. Prior to that, Rep. Richmond served on the House Judiciary Committee, where he played a role in the impeachment of Donald Trump, supported the First Step Act, and authored the CROWN Act to ban hair discrimination. He also served on the House Homeland Security Committee, where he chaired the Subcommittee on Cybersecurity, Infrastructure Protection, and Security Technologies.

In the 115th Congress, Congressman Richmond led the Congressional Black Caucus under the first two years of the Trump Administration. Within the first 100 days of his administration, Rep. Richmond and Members of the CBC met with President Trump and delivered a 134-page policy proposal for Black America entitled “What We Have to Lose: Solutions to Advance Black Families in the 21st Century.” This was a policy-driven response to the president’s constant question on the 2016 campaign trail of what Black voters have to lose by voting for Donald Trump. The answer laid out the history of racial oppression in America, from the beginning of slavery in 1619, to Black Codes, Jim Crow, and defacto segregation, along with policy solutions to right the wrongs of the past and finally provide Black families with the resources they need to restore their communities. Rep. Richmond ultimately compiled these policy solutions from hundreds of the CBC-supported bills into an omnibus bill called the Jobs and Justice Act of 2018, the first of its kind. Throughout his tenure as CBC Chair, Rep. Richmond served as a constant check on the repressive policies proposed by the Trump Administration, from the dismantling of civil rights protections across agencies, and the failed effort to repeal Obamacare without a replacement, to the disgraceful trillion dollar tax cut for the rich and draconian budget cuts to programs that literally help the most vulnerable people in our nation make ends meet. In his new role, Rep. Richmond will bring this same passion and commitment for the Black community as he continues his public service as a top aide to President-Elect Biden at a critical time in our nation’s history.

The Congressional Black Caucus is proud of the role our Members played in the 2020 election, including Rep. Richmond and Rep. Lisa Blunt Rochester as national co-chairs to the Biden campaign, Rep. Clyburn in his role in the South Carolina Caucus, and Senator Kamala Harris as Vice-Presidential running mate. We are proud to have sent three CBC Members to the White House: Barack Obama, Kamala Harris, and Cedric Richmond. And we are proud of the role CBC Members like Cedric Richmond will continue to play in getting our country closer to a more perfect union, one that truly delivers liberty and justice for all Americans. We remain steadfast partners in this effort and wish our friend and colleague well on this most awesome journey.