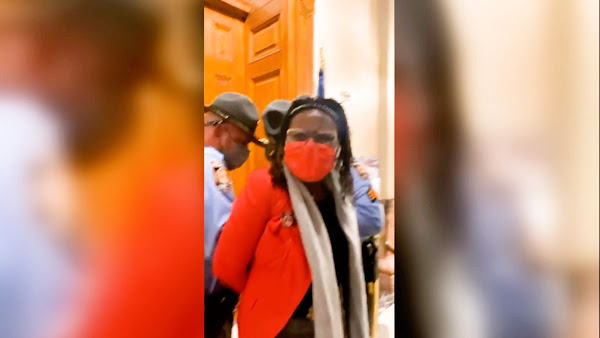 Georgia state Rep. Park Cannon was arrested and removed from the Georgia Capitol on Thursday after passage of the state's sweeping elections bill restricting voting access.

In a video posted to social media, a Georgia Capitol police officer speaks with the Democrat outside the door to Republican Gov. Brian Kemp's office.

After knocking on the office door during Kemp's signing of SB 202 -- an election overhaul bill -- Cannon is seen being led away by several officers with her hands cuffed behind her back.

Cannon faces two felony charges -- felony obstruction and preventing or disrupting general assembly session, according to an arrest affidavit seen by CNN. The affidavit states that Cannon was charged with disrupting General Assembly session because she "knowingly and intentionally did by knocking the governor's door during session of singing [sic] a bill."

The arrest affidavit for the felony obstruction charge said she "did knowingly and willfully hinder Officer E. Dorval and Officer G. Sanchez of the Capitol PD, a law enforcement officer in the lawful discharge or the officer's official duties by Use of Threats of Violence, violence to the person of said officer by stomping on LT Langford foot three times during the apprehension and as she was being escorted out of the property. The accused continued on kicking LT Langford with her heels."

Attorney Gerald Griggs told CNN he is representing Cannon. Griggs said he was at the Fulton County jail working to bond Cannon out after she was booked on felony obstruction charges.

"We are getting her out of jail currently. We are gathering information on the case as well. There are multiple videos and we are in contact with the DA," Griggs told CNN.

Posted by Councilman George L. Cook III at 6:19 AM