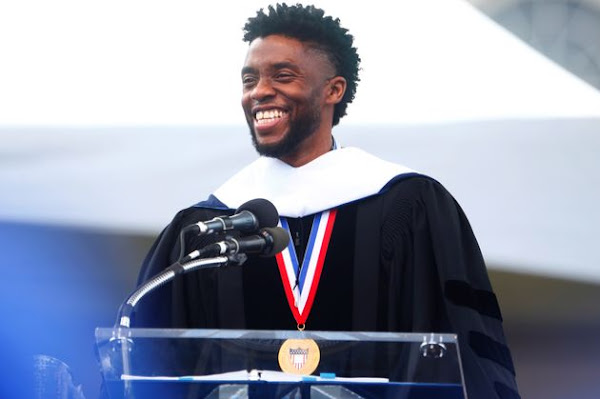 Howard University President Wayne A. I. Frederick is pleased to announce that the newly reestablished College of Fine Arts will be named in honor of alumnus Chadwick Boseman, whose remarkable career as an actor, director, writer, and producer inspired millions around the world. The news comes just weeks after the announcement of alumna and actress Phylicia Rashad as dean of the college. During his tenure at Howard,Boseman led a student protest against the absorption of the College of Fine Arts into the College of Arts & Sciences. Long after graduating, he, along with other alumni, continued to engage in conversations with Howard University administration- their efforts were not in vain. Plans to re-establish the College of Fine Arts were announced in early 2018.

“When Chadwick Boseman returned to campus in 2018 to serve as our commencement speaker, he called Howard a magical place. During his visit, I announced our plans to reestablish the College of Fine Arts and he was filled with ideas and plans to support the effort in a powerful way,” said President Frederick. “Chadwick’s love for Howard University was sincere, and although he did not live to see those plans through to fruition, it is my honor to ensure his legacy lives on through the Chadwick A. Boseman College of Fine Arts with the support of his wife and the Chadwick Boseman Foundation. I’m also elated to have the support of The Walt Disney Company’s Executive Chairman Bob Iger, who has graciously volunteered to lead the fundraising effort to build a state-of-the art facility and endowment for the college.”

“We would like to thank President Wayne A. I. Fredrick and the Howard University Board of Trustees for honoring our beloved Chad with the renaming of the reestablished College of Fine Arts. We would also like to thank Bob Iger for spearheading the fundraising efforts of this development,” said The Boseman Family.  “Chad fought to preserve the College of Fine Arts during his matriculation at Howard and remained dedicated to the fight throughout his career, and he would be overjoyed by this development. His time at Howard University helped shape both the man and the artist that he became, committed to truth, integrity, and a determination to transform the world through the power of storytelling. We are confident that under the dynamic leadership of his former professor and mentor the indomitable Phylicia Rashad that the Chadwick A. Boseman College of Fine Arts will inspire artistic scholars for many generations.”

“I am extremely pleased that Howard University has chosen to honor my husband in this way and elated that Ms. Rashad has accepted the role as Dean,” said Boseman’s wife, Simone Ledward-Boseman. “Chad was a very proud Bison — both Howard and Ms. Rashad played integral roles in his journey as an artist. The re-establishment of the College of Fine Arts brings this part of his story full-circle and ensures that his legacy will continue to inspire young storytellers for years to come.”

A native of South Carolina, Boseman graduated from Howard University in 2000 with a Bachelor of Fine Arts in directing. During his tenure, he had the fortunate opportunity to be trained and mentored by Rashad, who recognized his talent early on. "Unrelenting in his pursuit of excellence, Chadwick was possessed with a passion for inquiry and a determination to tell stories - through acting, writing, and directing - that revealed the beauty and complexity of our human spirit," said Rashad, who is elated about the news of Boseman’s recognition.

The Walt Disney Company’s Executive Chairman Robert A. Iger will personally lead fundraising efforts in honor of Boseman, a cherished member of the Disney/Marvel family, to build a new, state-of-the-art facility to house the college and an endowment for the Chadwick A. Boseman College of Fine Arts.

“Chadwick Boseman was an extraordinarily gifted, charismatic and kind-hearted person whose incredible talent and generous spirit were clearly reflected in his iconic performances, including as King T’Challa in ‘Black Panther,’ and in his tireless commitment to helping others. Through his tremendous example he inspired millions to overcome adversity, dream big and reach beyond the status quo, and this College named in his honor at his beloved Howard University will provide opportunities for future generations of artists to follow in his footsteps and pursue their dreams,” said Iger.

Boseman’s college classmate Ta-Nehisi Coates was a student writer for the Hilltop newspaper when Boseman and his fellow students orchestrated the protests to challenge the closing of the College of Fine Arts. Coates recalls how Howard nurtured Boseman’s sense of the power of the arts to affect change. Thus, he believes it’s only fitting that the University name the re-established program after one it’s most accomplished students.

“Naming the College of Fine Arts after Chad, I think it’s perfect and it’s exactly what should be done. His theater work, his movie work, his acting and his writing, this was a continuation of that activism. The arts for him were always about something more. We’ve had a long list of artists come out of Howard, but, in our generation, nobody can better articulate, by example or by artistry, what we learned at Howard and what the university gave to us. So, I think it’s just fitting – it makes me teary-eyed thinking about it– naming the College after our brother who never stopped fighting for it,” said Coates.

Today’s announcement kicks off a fundraising effort to build a new, state-of-the-art facility to become the home of the Chadwick A. Boseman College of Fine Arts. The building will also house the Cathy Hughes School of Communications and the University’s television and radio stations, WHUT-TV and WHUR 96.3 FM, creating a dynamic, one-stop complex for the arts and journalism combined. To donate, please visit https://giving.howard.edu/BosemanCollegeOfFineArts.