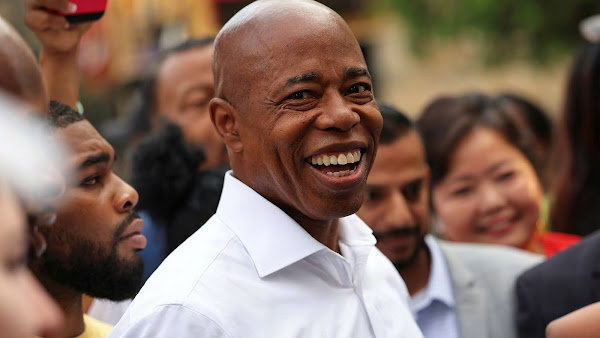 Brooklyn Borough President Eric Adams has taken an early lead in New York City's Democratic mayoral primary as votes continue to be tallied in a race that will be determined by ranked choice.

Adams had taken 30.9 percent of the vote in the first round with 88 percent of ballots tallied as of 11:23 p.m. ET. He led civil rights lawyer Maya Wiley with 21.7 percent and former New York City Sanitation Commissioner Kathryn Garcia with 20.5 percent. Former presidential candidate Andrew Yang came in fourth with 11.7 percent and conceded the race Tuesday evening.

Voters will likely be kept waiting for a winner to be declared until next month as the race’s ranked choice voting system plays out. Observers have speculated that a winner may not be formally declared until mid-July.

New York City is experimenting with ranked-choice voting for the first time in its history. Under the system, which has been used in San Francisco but few other major metropolitan areas, voters can rank their top five choices. Should no candidate win an outright majority, votes for subsequent picks are reallocated until one contender gets more than 50 percent of the vote.

Posted by Councilman George L. Cook III at 6:05 AM