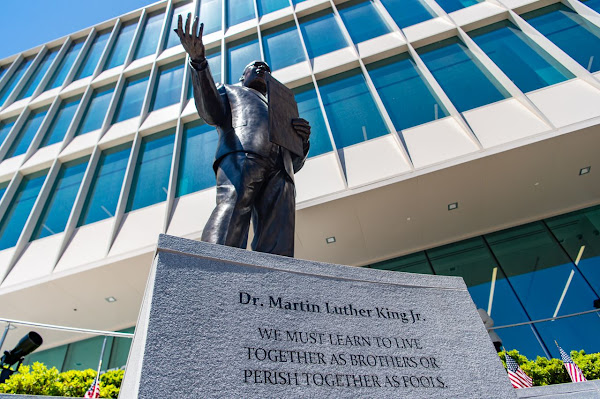 The facility is called the Martin Luther King, Jr. Justice Building and a 22-foot statue of the late civil rights activist stands outside the structure. Essex County Executive Joseph DiVincenzo, Jr. said naming the structure after King was a natural fit since it’s located next to a plaza and a smaller statue that was dedicated to him in 2015.

The third and fourth floors of the building will house courtrooms for tax and general equity courts, which were formerly located in the Wilentz Justice Complex on Washington Street. The first and second floors will have offices for the Essex County clerk, superintendent of elections, board of elections, surrogate and the board of taxation.

Gov. Phil Murphy said naming the building after King was a step in the direction of gaining equality. Lt. Gov. Sheila Oliver also said King “would be proud” of the project.

“Just over a year since the murder of George Floyd, we are on that long road to pursue equality and justice,” said Murphy. “And this building - in the name of an American hero unlike any other - is a huge step forward in that direction.”

“We must learn to live together as brothers or perish together as fools,” the engraving on the pedestal reads, quoting King. “But I know somehow, that only when it is dark enough, can you see the stars. I have decided to stick with love, hate is too great a burden to bear. Life’s most persistent and urgent question is, what are you doing for others?”

The project was funded through Essex County’s capital budget. Construction started in May 2020 and was completed in 13 months.