Obama: In Pursuit of a More Perfect Union to air Aug 3 at 9:00PM ET on HBO and HBO MAX 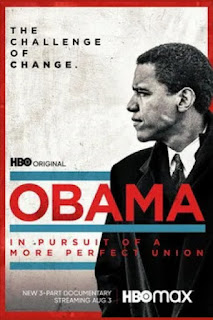 Directed by Emmy-winner Peter Kunhardt, Obama: In Pursuit of a More Perfect Union is a three-part documentary series chronicling the personal and political journey of President Barack Obama as the country grapples with its racial history. Weaving together conversations with colleagues, friends, and critics, and interspersed with his own speeches and news interviews, the series begins with Obama’s childhood and takes us through his perspective as the son of a white mother from Kansas and an African father, his spiritual formation informed by a generation of Black leaders, and his hopes for a more inclusive America.

The documentary series forms a cohesive picture of America under its first Black president. Obama’s presidency was unique in America’s history, but what was a historic step forward for the country also exposed the ever-present need to address issues about race, racial justice and the country’s history. Encapsulating both the man and the president, the documentary highlights the vision he had for the nation shaped by his own experiences and identity. Through today’s lens, the series reflects on the Obama administration with new understanding about the personal obstacles he faced and the challenging pursuit for equality in America.

The series is rated TV-14 and will air Tuesday August 3 at 9:00PM ET on HBO and HBO MAX. It will be available on demand August 14.