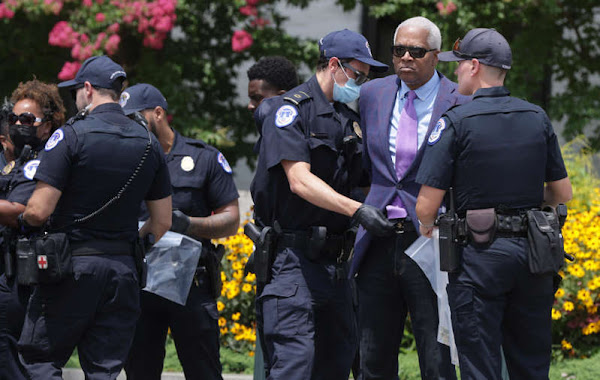 Rep. Hank Johnson, D-Ga., was among 10 demonstrators arrested by U.S. Capitol Police on Thursday in an orchestrated act of civil disobedience outside the Hart Senate Office Building on Capitol Hill.

Johnson and voting rights advocates participating in Black Voters Matter Fund's "Brothers Day of Action," a protest led by Black men to advocate for voting rights, called on Congress to end the filibuster and pass the For the People Act.

After his arrest Rep. Johnson tweeted:

.@BlackCaucus I was arrested today protesting against Senate inaction on voting rights legislation & filibuster reform. In the spirit of my dear friend and mentor – the late Congressman John Lewis – I was getting in #goodtrouble pic.twitter.com/JjN51mRpaC

Posted by Councilman George L. Cook III at 4:17 AM