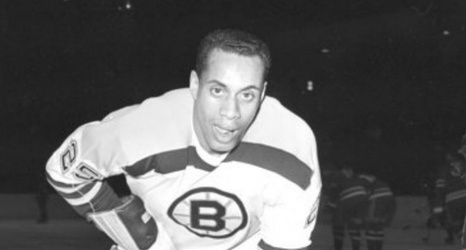 The US Senate passed legislation this week to grant Congress' highest honor, the Congressional Gold Medal, to Willie O'Ree, the first Black player to compete in the National Hockey League.

The bipartisan measure to honor Willie O'Ree unanimously passed the chamber on Tuesday. It now must be approved by the US House of Representatives for O'Ree to be awarded the medal. Known as "the Jackie Robinson of hockey," O'Ree, 85, broke the NHL's color barrier in 1958 with the Boston Bruins, one of six teams at the time.

The legislation would award O'Ree the nation's highest civilian award that Congress can bestow "in recognition of his extraordinary contributions and commitment to hockey, inclusion, and recreational opportunity."

The bill was first introduced in 2019 by Democratic Sen. Debbie Stabenow of Michigan and Republican Sen. Tim Scott of South Carolina. They reintroduced the legislation in February.

In a statement, Stabenow called O'Ree a "trailblazer for young people across the country," touting his work on the NHL initiative "Hockey Is For Everyone."

"From the hockey arena to serving young athletes in his community, Willie O'Ree's legacy has inspired generations," Scott said. "Willie's career didn't end on the ice; it was punctuated by the generations of athletes he helped navigate the path he paved."

"I look forward to the House acting quickly on this well-deserved recognition of Willie's historic achievements," the senator added.