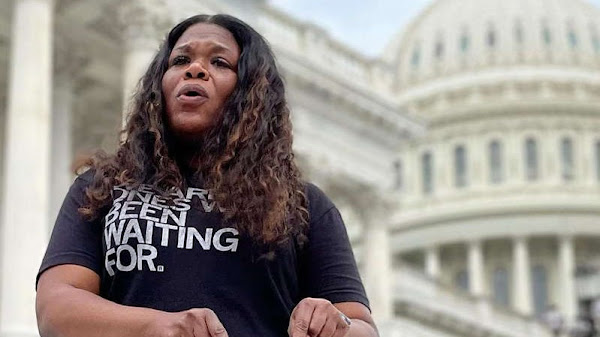 U.S. Representative Cori Bush camped outside the Capitol overnight to protest the end of the nationwide eviction moratorium put in place due to the COVID-19 pandemic.

"I'll be sleeping outside the Capitol tonight. We've still got work to do," wrote Bush, who was evicted three times and once lived in her car before the start of her political career.

More than six million Americans could face eviction on Sunday should Congress allow the current moratorium to expire. The Missouri Democrat, 45, protested Friday night into Saturday which she documented via Instagram.

In her first post, Bush called out several of her Democratic colleagues for going on vacation Friday as the House of Representatives adjourned for their August recess "rather than staying to vote to keep people in their homes."

Bush promoted H.R. 4791 — known as the Protecting Renters from Evictions Act of 2021 — numerous times to her Instagram story throughout her multi-day effort. The House bill proposed by California Democrat Maxine Waters would extend the eviction moratorium until the end of the 2021 calendar year.

As Bush noted, the U.S. Centers for Disease Control and Prevention previously extended the moratorium from June 30 to July 31. The Supreme Court later ruled that it was up to Congress to make the decision moving forward.

"The least our Democratic-controlled government can do is extend protections for people at risk of becoming unhoused. Especially, ESPECIALLY when we already have an unhoused crisis in our country. We need action NOW," Bush stated.

Saturday morning, Bush reiterated her point in another Instagram post begging lawmakers — including Speaker of the House Nancy Pelosi — to return to Washington, D.C., to immediately address the issue.

To our 7 million neighbors who are facing eviction: we're here, and we aren't going anywhere.

We must extend the eviction moratorium by midnight. pic.twitter.com/tgdBpWmjc9