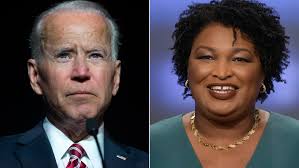 Talking heads and pundits on the right are trying to make a big deal of Democratic Georgia gubernatorial candidate Stacey Abrams not going to President Biden's speech on at voting rights at Morehouse University. Those pundits are trying to make it look like there is a rift between Abrams and Biden.

They are trying this despite Abrams stating that she had a prior engagement to attend.

Abrams does not appear to have an issue with Biden though.

My statement: I thank @POTUS and @VP for returning to Georgia to continue their steadfast advocacy for passage of federal legislation to protect the freedom to vote. They made clear again today that they are committed to restoring the Senate to safeguard our democracy. #gapol🧵