Senator Tim Scott failed Ketanji Brown Jackson, but it wasn't because he didn't vote for her 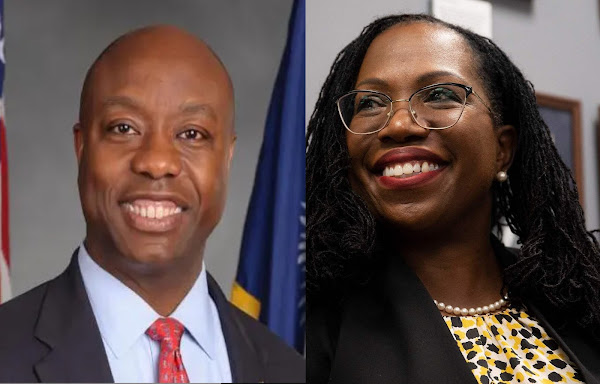 She was confirmed by a 53-47 vote with only three Republicans supporting her. Those three were Susan Collins of Maine, Lisa Murkowski of Alaska, and Mitt Romney of Utah.

Many African Americans were disappointed but not surprised that Tim Scott, the junior Senator from South Carolina chose not to support this historic nominee.

But, to me not supporting Jackson is not where he failed her. He failed her by not speaking up for her as a person and as a Black woman.

Scott could have spoken up by publicly saying that although he was ideologically opposed to Ketanji Brown Jackson's confirmation, she deserves respect and that his fellow Republican senators were wrong in their treatment of her.

Scott has a mother and I'm assuming aunts, cousins, and nieces that are also Black. He wouldn't want anyone treating them as Jackson was treated. He should have thought of those Black women in his life and spoke up not as a senator but as a Black man.

In my opinion, nothing but cowardice and ambition stopped him from speaking up.

Scott has gone on Fox News lamenting how he was treated by the left after not supporting Jackson. He should stop whining and think about how Jackson felt after being attacked for hours during those hearings.

During that time she showed more grace, bravery, integrity, and calm under fire than Scott ever will.

Sadly, Senator Tim Scott has forgotten where he came from, but we won't forget what he has shown himself to be.