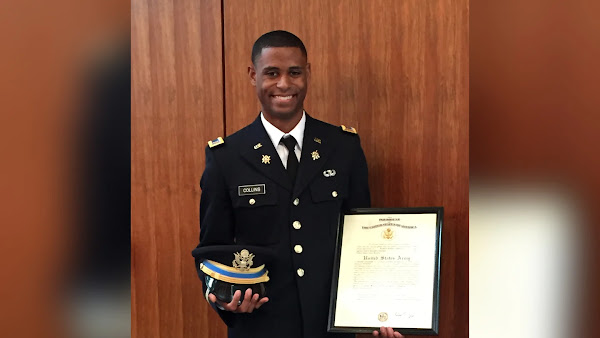 Family, friends and the communities of two universities dedicated a memorial to honor the life and legacy of Army Lt. Richard Collins III.

Almost five years have passed since Collins was killed while visiting the University of Maryland, College Park, campus. He was just days away from graduation at Bowie State University, when he was fatally stabbed while at a bus stop on the UMCP campus.

On Monday, both schools, Collins' parents and friends gathered to dedicate the Lt. Richard Collins III Plaza, while calling on the larger community to take action to prevent racism and violence.

University of Maryland President Darryll Pines said not only will Collins' life and legacy be remembered on campus, but it is now built into the landscape.

"The world must remember his name. Today, we've taken an important step forward toward ensuring the legacy of Lt. Collins will never be forgotten," Pines said.

We will always love you, son. Thank you," said Collins' father, Richard Collins.

"He was prepared to give his life for this country in the battlefield. What we didn't know was that battlefield wouldn't be overseas, it would be right here on U.S. soil," said Collins' mother, Dawn Collins.

"No, this is not the end. This is the continuation of a fight against racism and violence and injustice in our society," Bowie State University President Aminta Breaux said.The new plaza is near Montgomery and Annapolis halls, and it overlooks the bus stop where Lt. Richard Collins III was killed.