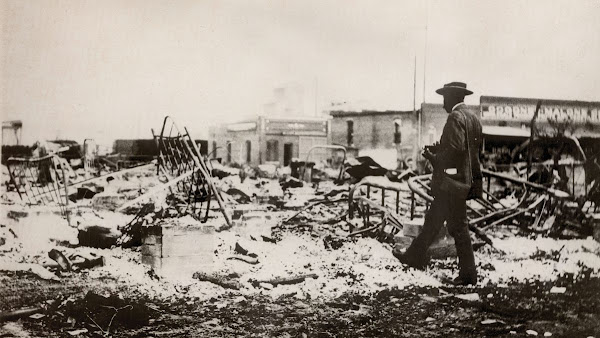 A Proclamation on Day Of Remembrance: 100 Years After The 1921 Tulsa Race Massacre

One hundred years ago, a violent white supremacist mob raided, firebombed, and destroyed approximately 35 square blocks of the thriving Black neighborhood of Greenwood in Tulsa, Oklahoma. Families and children were murdered in cold blood. Homes, businesses, and churches were burned. In all, as many as 300 Black Americans were killed, and nearly 10,000 were left destitute and homeless. Today, on this solemn centennial of the Tulsa Race Massacre, I call on the American people to reflect on the deep roots of racial terror in our Nation and recommit to the work of rooting out systemic racism across our country.

Before the Tulsa Race Massacre, Greenwood was a thriving Black community that had grown into a proud economic and cultural hub. At its center was Greenwood Avenue, commonly known as Black Wall Street. Many of Greenwood’s 10,000 residents were Black sharecroppers who fled racial violence after the Civil War.

In the decades following the Civil War and Reconstruction, Greenwood became a place where Black Americans were able to make a new start and secure economic progress despite the continued pain of institutional and overt racism. The community was home to a growing number of prominent Black entrepreneurs as well as working-class Black families who shared a commitment to social activism and economic opportunity. As Greenwood grew, Greenwood Avenue teemed with successful Black-owned businesses, including restaurants, grocery stores, hotels, and offices for doctors, lawyers, and dentists. The community also maintained its own school system, post office, a savings and loan institution, hospital, and bus and taxi service.

Despite rising Jim Crow systems and the reemergence of the Ku Klux Klan, Greenwood’s economic prosperity grew, as did its citizens’ demands for equal rights. This made the community a source of pride for many Black Americans. It also made the neighborhood and its families a target of white supremacists. In 2 days, a violent mob tore down the hard-fought success of Black Wall Street that had taken more than a decade to build.

In the years that followed, the destruction caused by the mob was followed by laws and policies that made recovery nearly impossible. In the aftermath of the attack, local ordinances were passed requiring new construction standards that were prohibitively expensive, meaning many Black families could not rebuild. Later, Greenwood was redlined by mortgage companies and deemed “hazardous” by the Federal Government so that Black homeowners could not access home loans or credit on equal terms. And in later decades, Federal investment, including Federal highway construction, tore down and cut off parts of the community. The attack on Black families and Black wealth in Greenwood persisted across generations.

The Federal Government must reckon with and acknowledge the role that it has played in stripping wealth and opportunity from Black communities. The Biden-Harris Administration is committed to acknowledging the role Federal policy played in Greenwood and other Black communities and addressing longstanding racial inequities through historic investments in the economic security of children and families, programs to provide capital for small businesses in economically disadvantaged areas, including minority-owned businesses, and ensuring that infrastructure projects increase opportunity, advance racial equity and environmental justice, and promote affordable access.

A century later, the fear and pain from the devastation of Greenwood is still felt. As Viola Fletcher, a 107-year-old survivor of the Tulsa Race Massacre courageously testified before the Congress recently, “I will never forget the violence of the white mob when we left our home. I still see Black men being shot, Black bodies lying in the street. I still smell smoke and see fire. I still see Black businesses being burned. I still hear airplanes flying overhead. I hear the screams. I have lived through the massacre every day. Our country may forget this history, but I cannot.”

With this proclamation, I commit to the survivors of the Tulsa Race Massacre, including Viola Fletcher, Hughes Van Ellis, and Lessie Benningfield Randle, the descendants of victims, and to this Nation that we will never forget. We honor the legacy of the Greenwood community, and of Black Wall Street, by reaffirming our commitment to advance racial justice through the whole of our government, and working to root out systemic racism from our laws, our policies, and our hearts.

NOW, THEREFORE, I, JOSEPH R. BIDEN JR., President of the United States of America, by virtue of the authority vested in me by the Constitution and the laws of the United States, do hereby proclaim May 31, 2021, a Day of Remembrance: 100 Years After The 1921 Tulsa Race Massacre. I call upon the people of the United States to commemorate the tremendous loss of life and security that occurred over those 2 days in 1921, to celebrate the bravery and resilience of those who survived and sought to rebuild their lives again, and commit together to eradicate systemic racism and help to rebuild communities and lives that have been destroyed by it.

IN WITNESS WHEREOF, I have hereunto set my hand this thirty-first day of May, in the year of our Lord two thousand twenty-one, and of the Independence of the United States of America the two hundred and forty-fifth.