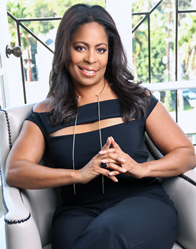 Urban One  announced that veteran television executive Michelle L. Rice has been named President of TV One and CLEO TV. Since February 2018, Rice has served as General Manager with full management oversight of TV One, the general entertainment network serving a diverse audience of adult Black viewers, and spearheaded the 2019 launch of CLEO TV, an aspirational cable network targeting Millennial and Gen X women of color.

“Michelle’s dynamic leadership has strengthened network partnerships, developed strategic alliances, and expanded distribution for both TV One and CLEO TV. All of which has uniquely positioned our networks to navigate the changing broadcast environment and catapult them to even greater success in the future,” said Alfred Liggins, President and CEO of Urban One.

“It has been a tremendous honor to work with such an exceptionally talented team and group of leaders who continue to transform and grow the business every day, even in the face of the most challenging circumstances presented to us this year. I’m incredibly excited about the future of both TV One and CLEO TV,” said Rice. “I am grateful for this recognition and the opportunity to continue building the TV One and CLEO TV brands. I appreciate the unwavering support and confidence in my leadership from Alfred Liggins and Urban One Founder and Chairperson, Cathy Hughes.”

Rice has successfully navigated and led the organization through a multitude of business and operational challenges since the onset of the COVID-19 pandemic. Under her leadership, TV One has expanded its existing relationship with AT&T to include the upcoming launch of CLEO TV across DIRECT TV, AT&T TV, and AT&T NOW and with Philo TV, resulting in TV One’s first vMVPD distribution deal. Rice has brokered an exclusive partnership with the NAACP to develop and launch the ‘Hey Black America’ digital content campaign in response to a myriad of political and social issues that profoundly impact communities of color. TV One and CLEO TV have also developed REPRESENT THE VOTE: OUR VOICE, OUR FUTURE, a three-part series of virtual town halls designed to tackle various social, economic, and political issues impacting Black women voters across the U.S.

ABOUT URBAN ONEUrban One, Inc. (urban1.com), together with its subsidiaries, is the largest diversified media company that primarily targets Black Americans and urban consumers in the United States. The Company owns TV One, LLC (tvone.tv), a television network serving more than 59 million households, offering a broad range of original programming, classic series and movies designed to entertain, inform and inspire a diverse audience of adult Black viewers. As of June 2020, Urban One currently owns and/or operates 61 broadcast stations (including all HD stations, translator stations and the low power television stations we operate) branded under the tradename "Radio One" in 14 urban markets in the United States. Through its controlling interest in Reach Media, Inc. (blackamericaweb.com), the Company also operates syndicated programming including the Rickey Smiley Morning Show, the Russ Parr Morning Show and the DL Hughley Show. In addition to its radio and television broadcast assets, Urban One owns iOne Digital (ionedigital.com), our wholly owned digital platform serving the African-American community through social content, news, information, and entertainment websites, including its Cassius, Bossip, HipHopWired and MadameNoire digital platforms and brands. We also have invested in a minority ownership interest in MGM National Harbor, a gaming resort located in Prince George's County, Maryland. Through our national multi-media operations, we provide advertisers with a unique and powerful delivery mechanism to the African-American and urban audiences.

ABOUT TV ONELaunched in January 2004, TV One serves 59 million households, offering a broad range of real-life and entertainment-focused original programming, classic series, movies and music designed to entertain and inform a diverse audience of adult black viewers. The network represents the best in black culture and entertainment with fan favorite shows Unsung, Uncensored, ATL Homicide, Fatal Attraction and Urban One Honors. In addition, TV One is the cable home of original blockbuster films including When Love Kills: The Falicia Blakely Story, Love Under New Management: The Miki Howard Story, Bobbi Kristina and The Bobby DeBarge Story. TV One is solely owned by Urban One, Inc., formerly known as Radio One, Inc. [NASDAQ: UONE and UONEK, http://www.urban1.com , the largest African-American owned multi-media company primarily targeting Black and urban audiences.

ABOUT CLEO TVLaunched in January 2019, CLEO TV is a lifestyle and entertainment network targeting Millennial and Gen X women of color. Derived from the name Cleopatra, one of the most powerful, trendsetting, rule-breaking and iconic women in history, CLEO TV offers distinctive content that defies negative and cultural stereotypes of today's modern women. Original and acquired series covering topics such as travel, home design, cooking, talk shows, movies, docu-series, and sitcoms include: Just Eats with Chef JJ, New Soul Kitchen, Living by Design with Jake and Jazz, and Lens of Culture. CLEO TV is currently available on Comcast Xfinity and Charter Spectrum in various markets, as well as Philo. CLEO TV is fully owned by TV One, LLC, a brand of Urban One, Inc., formerly known as Radio One, Inc. [NASDAQ: UONE and UONEK, http://www.urban1.com , the largest African-American owned multi-media company primarily targeting Black and urban audiences. Visit http://www.mycleo.tv for more information. 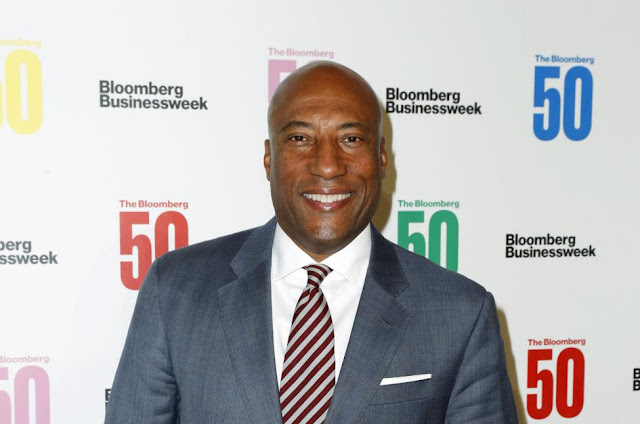 Posted by Councilman George L. Cook III at 4:24 AM No comments: 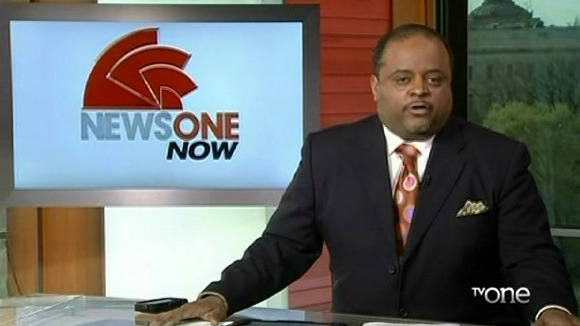 The show, first conceived by TV One CEO Alfred Liggins, debuted in 2013, with a mission of offering a daily voice to African-Americans interested in important political and social issues.

“Providing a platform for Black voices is in the DNA of our entire company,” said Liggins, in a statement “We know there is a void in mainstream media and we plan to continue to be an outlet for Black news. Roland Martin will be a part of that plan.”

The program “struggled to attract a wide audience,” said Michelle L. Rice, the interim general manager of TV One, in a statement.”Like any other network, we had to make a difficult choice.” TV One began making adjustments to the show in recent weeks, but the show “did not gain traction with advertisers and viewers,” the network said. TV One intends to “restructure ‘NewsOne Now’ in 2018 under a new format that will better serve its audience and advertisers.” Some staff cuts took place as a result of the decision, the network said.

Martin is expected to stay on with TV One parent Urban One. “I am undoubtedly saddened by ‘NewsOne Now’ ending daily production,” said Martin, in a statement. “We set out to give America, specifically Black America, a show that spoke to our issues, concerns and unique perspective. And we did just that.”

There has been controversy around HBO's upcoming show Confederate since it was announced. During last nights airing on Game of Thrones #NoConfederate began trending. The hashtag is part of a campaign to get HBO to cancel the show before it even airs.The campaign was organized by April Reign, the activist behind #OscarsSoWhite.

This Sunday at 9pm ET, during @GameOfThrones, we ask you to stand with us. We want to send a message to @hbo using hashtag #NoConfederate.

Many are upset because Confederate is a show that will chronicle events leading to the "Third American Civil War". It takes place in an alternate timeline, where the southern states have successfully seceded from the Union, giving rise to a nation in which slavery remains legal and has evolved into a modern institution.

HBO has released the following statement on #NoConfederate:

“We have great respect for the dialogue and concern being expressed around ‘Confederate.’ We have faith that Nichelle, Dan, David and Malcolm will approach the subject with care and sensitivity. The project is currently in its infancy so we hope that people will reserve judgment until there is something to see.”

BET Networks, a division of Viacom (Nasdaq:VIAB, VIA), today announced it has acquired Soul Train from InterMedia Partners and The Yucaipa Companies. The acquisition, which brings together two quintessential African American brands, represents an investment in an iconic franchise that uniquely lends itself to providing fans with a wide range of experiences across multiple platforms, beyond the television programs that audiences have enjoyed for decades. The transaction serves to further strengthen BET’s investment in content and underlines the network’s leadership in music-related content.
Owning Soul Train’s intellectual property will allow BET to further build on the success of the Soul Train Awards, which BET re-launched in 2009, and strengthens the network’s commitment to original content. The assets acquired include one of the largest libraries of African American, music-oriented content in the world, including over 1,100 television episodes and 40 television specials. Beyond television, BET will grow the ways in which audiences of all ages are able to interact with this iconic brand, creating a host of ancillary revenue opportunities ranging from live events to consumer products.
“BET Networks is honored to have acquired a brand with such a rich history and unique content that is forever relevant to all segments of our audience,” commented Richard Gay, Executive Vice President, Strategy and Operations at BET Networks. “With a Broadway play and a concert tour as examples of opportunities in the works, we look forward to finding engaging and smart ways to grow the brand while preserving its heritage and legacy in music, dance and fashion.”
About BET Networks
BET Networks, a subsidiary of Viacom Inc. (NYSE:VIA, VIA.B), is the nation's leading provider of quality entertainment, music, news and public affairs television programming for the African-American audience. The primary BET channel reaches more than 90 million households and can be seen in the United States, Canada, the Caribbean, the United Kingdom and sub-Saharan Africa. BET is the dominant African-American consumer brand with a diverse group of business extensions: BET.com, a leading Internet destination for Black entertainment, music, culture, and news; CENTRIC, a 24-hour entertainment network targeting the African-American Woman; BET Music Networks - BET Jams, BET Soul and BET Gospel; BET Home Entertainment; BET Live, BET’s growing festival business; BET Mobile, which provides ringtones, games and video content for wireless devices; and BET International, which operates BET around the globe.
View source version on businesswire.com:http://www.businesswire.com/news/home/20160404006149/en/
BET Networks
Terrece Walker, 212-205-3264

Posted by Councilman George L. Cook III at 8:14 AM No comments: