The Hampton Pirates are going to the Big Dance! 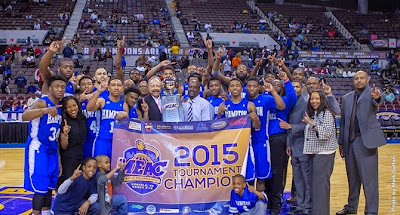 The 16-17 Hampton Pirates completed an improbable tournament run as a 6 seed to the MEAC title by defeating Delaware State 82-61 in the MEAC Championship Game. With the victory Hampton earned an automatic bid to the NCAA Basketball Tournament. The Pirates were led by Junior guard Deron Powers and guard Brian Darden who scored 20 points apiece. Deron Powers was named the tournament's Most Outstanding Player.

This is Hampton's fifth MEAC Tournament title. Congratulations Pirates and good luck in the NCAA Tournament.