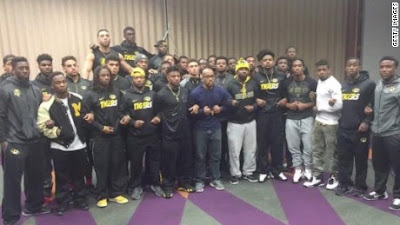 This is a great story. All too often we accuse our black athletes of being selfish and not being socially conscious . These young men are doing the right thing and taking a stand against racism on their campus. This is not an symbolic gesture either, while some may go the NFL many others will not so some are legitimate risking their education and their spot on the team. I am so proud of these young men right now. George Cook AfricanAmericanReports.com.

More than 30 football players at the University of Missouri will not participate in any practices or games until Missouri System president Tim Wolfe resigns or is terminated. Several black team members announced their decision to strike on social media Saturday night and Missouri's Legion of Black Collegians posted a statement on behalf of the team with a picture of players unified in support of the boycott.

Wolfe's response to a series of racist incidents has been considered inadequate by many students who believe racism has poisoned the campus. A graduate student, Jonathan Butler, announced earlier in the week he was going on a hunger strike until Wolfe was removed. The most recent racist incident came Oct. 24 when a swastika was drawn with human feces on a college dorm's white wall.

Missouri's athletic department issued a statement saying it's "aware of the declarations made tonight by many of our student-athletes. We all must come together with leaders from across our campus to tackle these challenging issues and we support our student-athletes right to do so."