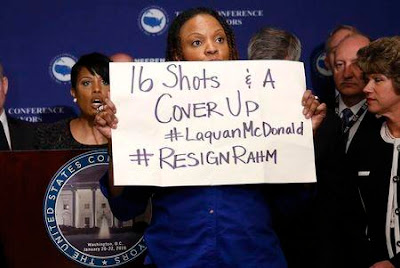 Demonstrators from the Black Lives Matter movement interrupted the U.S. Conference of Mayors' meeting on Wednesday, protesting the killing of a Chicago teenager by police and the lead-tainted water supply of Flint, Michigan.

At least three people among onlookers and one person on stage held up signs when Baltimore Mayor Stephanie Rawlings-Blake, the group's president, spoke during the meeting's opening news conference at a hotel in Washington, D.C.

One protester interrupted her several times, shouting, "You failed us!" Baltimore was torn in April by rioting over the death of black detainee Freddie Gray, and six police officers are facing charges.