Whoopi Goldberg can call herself whatever she wants! 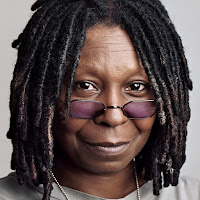 I'm sure many have heard Whoopi Goldberg's comments about her not being African American on the TV show The View and heard about the backlash that followed on social media. Just in case, you missed it read Whoopi's comments below.

Now I identify as African-American and have my own opinions about what Goldberg said but you know what, THAT DOESN'T MATTER!

My argument against those who have a problem with the term African-American or any other hyphenated identifier has always been that we as Americans have the right to identify however we want. So to me, those African Americans upset at Whoopi for simply wanting to identify as American are being hypocritical. This is about being able to identify as you want not on making others identify as you would like them to. Whoopi Goldberg has that right to call herself whatever she wants whether anyone likes it or not.

That may not be a popular stance but I believe it's one that those who want to be treated fairly and equally should embrace. Whoopi still stands up for African American causes and issues and how she identify does not change that.

I, you, and Whoopi Goldberg can call ourselves whatever we want. What we call ourselves is not the most important issue, though. It's what we do to make things better that ultimately counts.