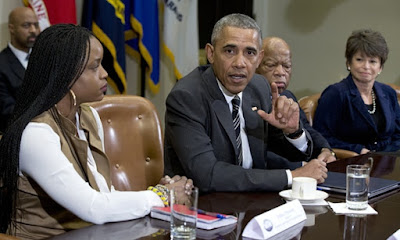 On February 18 President Obama meet with several African American civil rights leaders. The White House billed the meeting as as a first-of-its kind gathering of veteran leaders, young activists, and the leader of the free world. Black Lives Matter was also invited but declined to attend the meeting. The groups co-founder Aislinn Pulley wrote the following statement as to why they refused in an op-ed posted at http://www.truth-out.org/

I respectfully declined the invitation to the White House to discuss criminal legal reform and to celebrate Black History Month. I was under the impression that a meeting was being organized to facilitate a genuine exchange on the matters facing millions of Black and Brown people in the United States. Instead, what was arranged was basically a photo opportunity and a 90-second sound bite for the president. I could not, with any integrity, participate in such a sham that would only serve to legitimize the false narrative that the government is working to end police brutality and the institutional racism that fuels it. For the increasing number of families fighting for justice and dignity for their kin slain by police, I refuse to give its perpetrators and enablers political cover by making an appearance among them.

Read Aislinn Pulley's full op-ed here" Black Struggle Is Not a Sound Bite: Why I Refused to Meet With President Obama