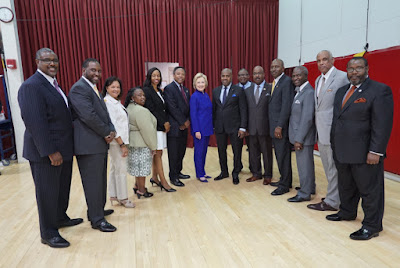 Just ahead on the June 7th Primary the N.J. Black Mayors’ Alliance for Social Justice yesterday formally endorsed Hillary Clinton for president following a meeting with the Democrat candidate.The mayors discussed issues important to them including concerns about the economy,income equality gap, and the unemployment rate in NJ with Clinton. Here's an excerpt about the meeting from the Amsterdam News.

The mayors discussed issues important to them, including the economy. As the nation comes back from the worst downturn since the recession, the elected officials said the poor and disadvantaged have not benefited. In many New Jersey cities, more than a third of minority adults are unemployed, even when the nation is doing well financially. Data from a 2015 U.S. Census study show that the income equality gap in the Garden State is among the worst in the nation.

“The growing gap between the very wealthy and the poor, the disadvantaged and the middle class is a calamity that threatens the very existence of democracy in America,” said Newark Mayor Ras J. Baraka, Chairman of the Black Mayors’ Alliance. “The fact that anyone takes Donald Trump seriously and that he has become a serious candidate for President is symptomatic of what will happen to our nation if income inequality continues to get worse. Hillary Clinton offers our best chance to achieve economic and social justice in America.”

Clinton expressed her support for the campaign of the Black mayors to expand job training and apprenticeship programs targeted to sectors with job growth, to strengthen school vocational programs, to expand support for MWBEs and to strengthen re-entry programs for ex-offenders. She also supports increasing the minimum wage in New Jersey.