Hillary Clinton speaks out on Trump's outreach to African Americans 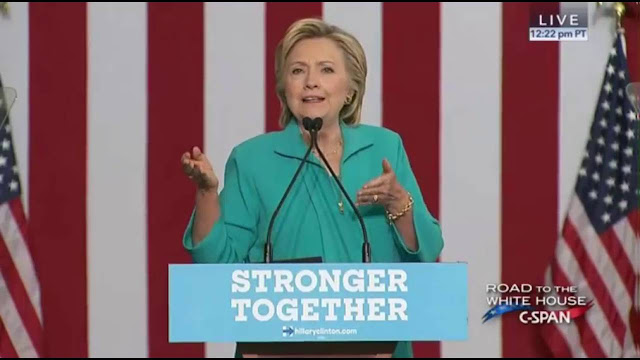 During a campaign speech at a community college in Reno, Nevada Hillary Clinton called out Donald Trump on his false outreach to African Americans and other minorities. She took on his ignorance about black issues, his bigotry, and his use of stereotypes in his attempts to court black voter. She called him out on his tie to birther movement and being slow to repudiate white nationalist who support him. Read that excerpt from a transcript of her speech below.

...In just the past week, under the guise of "outreach" to African Americans, Trump has stood up in front of largely white audiences and described black communities in insulting and ignorant terms:

"Poverty. Rejection. Horrible education. No housing. No homes. No ownership.

Crime at levels nobody has seen…

Those are his words.

Donald Trump misses so much.

The vibrancy of black-owned businesses…Or the strength of the black church… He doesn’t see the excellence of historically black colleges and universities or the pride of black parents watching their children thrive…And he certainly doesn’t have any solutions to take on the reality of systemic racism and create more equity and opportunity in communities of color.

It takes a lot of nerve to ask people he’s ignored and mistreated for decades, "What do you have to lose?" The answer is everything!

Trump’s lack of knowledge or experience or solutions would be bad enough.

But what he’s doing here is more sinister.

Trump is reinforcing harmful stereotypes and offering a dog whistle to his most hateful supporters.

It’s a disturbing preview of what kind of President he’d be.

This is what I want to make clear today:

A man with a long history of racial discrimination, who traffics in dark conspiracy theories drawn from the pages of supermarket tabloids and the far reaches of the internet, should never run our government or command our military.

Now, I know some people still want to give Trump the benefit of the doubt.

They hope that he will eventually reinvent himself – that there’s a kinder, gentler, more responsible Donald Trump waiting in the wings somewhere.

After all, it’s hard to believe anyone – let alone a nominee for President of the United States – could really believe all the things he says.

But the hard truth is, there’s no other Donald Trump. This is it.

Maya Angelou once said: "When someone shows you who they are, believe them the first time."

Well, throughout his career and this campaign, Donald Trump has shown us exactly who he is. We should believe him.

When Trump was getting his start in business, he was sued by the Justice Department for refusing to rent apartments to black and Latino tenants.

Three years later, the Justice Department took Trump back to court because he hadn’t changed.

The pattern continued through the decades.

State regulators fined one of Trump’s casinos for repeatedly removing black dealers from the floor. No wonder the turn-over rate for his minority employees was way above average.

And let’s not forget Trump first gained political prominence leading the charge for the so-called "Birthers."

In 2015, Trump launched his own campaign for President with another racist lie. He described Mexican immigrants as rapists and criminals.

And he accused the Mexican government of actively sending them across the border. None of that is true.

Oh, and by the way, Mexico’s not paying for his wall either.

If it ever gets built, you can be sure that American taxpayers will be stuck with the bill.

Since then, there’s been a steady stream of bigotry.

We all remember when Trump said a distinguished federal judge born in Indiana couldn’t be trusted to do his job because, quote, "He’s a Mexican."

The man who today is the standard bearer of the Republican Party said a federal judge was incapable of doing his job solely because of his heritage.

Even the Republican Speaker of the House, Paul Ryan, described that as "the textbook definition of a racist comment."

To this day, he’s never apologized to Judge Curiel.

But for Trump, that’s just par for the course.

This is someone who retweets white supremacists online, like the user who goes by the name "white-genocide-TM." Trump took this fringe bigot with a few dozen followers and spread his message to 11 million people.

His campaign famously posted an anti-Semitic image – a Star of David imposed over a sea of dollar bills – that first appeared on a white supremacist website.

The Trump campaign also selected a prominent white nationalist leader as a delegate in California. They only dropped him under pressure.

When asked in a nationally televised interview whether he would disavow the support of David Duke, a former leader of the Ku Klux Klan, Trump wouldn’t do it. Only later, again under mounting pressure, did he backtrack.

And when Trump was asked about anti-Semitic slurs and death threats coming from his supporters, he refused to condemn them.

Through it all, he has continued pushing discredited conspiracy theories with racist undertones...