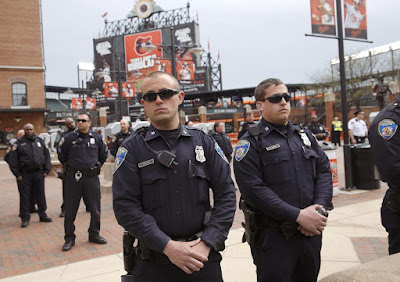 The U.S. Department of Justice has released its damning findings after an investigation into the Baltimore Police Department. The report confirms that the BPD is a national disgrace to all law enforcement and is a hotbed of civil rights abuses and police misconduct. The department regularly engages in a pattern or practice of conduct that violates the First and Fourth Amendments of the Constitution as well as federal anti-discrimination laws. BPD alos makes stops, searches and arrests without the required justification and sadly that's just the top of the iceberg. Read more about the USDOJ's findings below.

The Justice Department announced today that it found reasonable cause to believe that the Baltimore City Police Department (BPD) engages in a pattern or practice of conduct that violates the First and Fourth Amendments of the Constitution as well as federal anti-discrimination laws.  BPD makes stops, searches and arrests without the required justification; uses enforcement strategies that unlawfully subject African Americans to disproportionate rates of stops, searches and arrests; uses excessive force; and retaliates against individuals for their constitutionally-protected expression.  The pattern or practice results from systemic deficiencies that have persisted within BPD for many years and has exacerbated community distrust of the police, particularly in the African-American community.  The city and the department have also entered into an agreement in principle to work together, with community input, to create a federal court-enforceable consent decree addressing the deficiencies found during the investigation.

“Public trust is critical to effective policing and public safety,” said Attorney General Loretta E. Lynch.  “Our investigation found that Baltimore is a city where the bonds of trust have been broken, and that the Baltimore Police Department engaged in a pattern or practice of unlawful and unconstitutional conduct, ranging from the use of excessive force to unjustified stops, seizures and arrests.  The results of our investigation raise serious concerns, and in the days ahead, the Department of Justice will continue working tirelessly to ensure that all Baltimoreans enjoy the safety, security and dignity they expect and deserve.  I am grateful to all of the community members, local officials, faith leaders and current and former police officers who spoke with us during the course of our inquiry, and whose input will remain critical to our efforts as we move forward.  Additionally, I commend the city and BPD for its proactive and collaborative approach to our inquiry and for demonstrating a strong commitment to restoring public confidence by already taking steps to make needed changes.  I look forward to continuing our work together to implement urgent and necessary reforms.”

“We found that BPD has engaged in a pattern or practice of serious violations of the U.S. Constitution and federal law that has disproportionately harmed Baltimore’s African-American community and eroded the public’s trust in the police,” said Principal Deputy Assistant Attorney General Vanita Gupta, head of the Civil Rights Division.  “The agency also fails to provide officers with the guidance, oversight and resources they need to police safely, constitutionally and effectively.  In communities across America, even in communities where trust has been broken, we’ve seen transformative reform rebuild relationships and advance public safety.  In the weeks ahead, as we negotiate our consent decree with the city, we will seek input from law enforcement and community members.  With the city and commissioner’s commitment to reform, I am optimistic that we will work to drive that same progress in Baltimore.”

In May 2015, Attorney General Lynch announced the comprehensive investigation into the BPD after considering requests from city officials and hearing directly from community members about a potential pattern or practice of constitutional violations.  The investigation focused on BPD’s use of force, including deadly force; stops, searches and arrests; and discriminatory policing.

In the course of its pattern or practice investigation, the department interviewed and met with city leaders and police officials, including BPD Commissioner Kevin Davis, former commissioners and numerous officers throughout all ranks of the police department; accompanied line officers on dozens of ride-alongs in every police district; conducted hundreds of interviews and participated in meetings with community members, activists, and other stakeholders; reviewed hundreds of thousands of pages of police documents, including all relevant policies and training materials; and analyzed BPD’s data on internal affairs, use of force, sexual assault cases and pedestrian stops, searches and arrests.

During the course of its investigation, the department found that the legacy of “zero tolerance” street enforcement, along with deficient policies, training and accountability systems, resulted in conduct that routinely violates the Constitution and federal anti-discrimination law.  Throughout the investigation, the department heard consistently from both the community and law enforcement that BPD requires significant reforms to address problems that undermine its efforts to police constitutionally and effectively.

The department found reasonable cause to believe that BPD engages in a pattern or practice of:

Conducting stops, searches and arrests without meeting the requirements of the Fourth Amendment;
Focusing enforcement strategies on African Americans, leading to severe and unjustified racial disparities in violation of Title VI of the Civil Rights Act and the Safe Streets Act;
Using unreasonable force in violation of the Fourth Amendment;
Interacting with individuals with mental health disabilities in a manner that violates the Americans with Disabilities Act; and
Interfering with the right to free expression in violation of the First Amendment.
The department also identified serious concerns about other BPD practices, including an inadequate response to reports of sexual assault, which may result, at least in part, from underlying gender bias.  Another significant concern identified by the department was transport practices that place detainees at significant risk of harm.

Policies, training, data collection and analysis to allow for the assessment of officer activity and to ensure that officers’ actions conform to legal and constitutional requirements;
Technology and infrastructure to ensure capability to effectively monitor officer activity;
Officer support to ensure that officers are equipped to perform their jobs effectively and constitutionally; and
Community policing strategies to guide all aspects of BPD’s operations and help rebuild the relationship between BPD and the various communities it serves.
The agreement in principle provides a framework for change, but the department will be doing community outreach to solicit input in developing comprehensive reforms.  Comments may be provided by email at Community.Baltimore@usdoj.govEmail links icon.

Throughout the department’s investigation, BPD leadership remained receptive to preliminary feedback and technical assistance, and started the process of implementing reforms.  BPD leadership has proactively taken steps to address some of the findings, including updating its policies, instituting new trainings and responding to other issues identified by the department.  While these measures are an important start to cooperative reform, a comprehensive agreement is still needed to remedy all of the department’s findings.

In October 2014, city and BPD leadership requested to enter a collaborative reform process with the Justice Department’s Office of Community Oriented Policing Services (COPS office).  While the Civil Rights Division opened the pattern or practice investigation in May 2015, the COPS office, the Justice Department’s Office of Justice Programs and others have maintained their ongoing efforts to offer federal resources, such as technical assistance, to the BPD, city officials and community leaders.