What's going on with Michael Jordan? 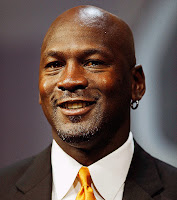 In the last couple of weeks something has happened to NBA legend Michael Jordan. In the past, Jordan has been notorious for doing little to help his own while profiting off his own by selling them $200 sneakers that they can't afford. This is a man who for most of his professional life has avoided even talking about issues that affect African Americans. He has not done or said anything that might piss off anyone for fear of hurting sneaker and apparel sales of Nike and his own brand.

But recently things seem to be changing. Jordan has given $1 million to the NAACP Legal Defense Fund and another $5 million to the National Museum of African American History and Culture. That's not the Michael Jordan many of us have always heard about.

What is going on here? I have three theories.

THEORY ONE: An alien has inhabited the body of Michael Jordan and is trying to curry favor among humans before sending for his fleet of starships to blow us all to hell and take our entire species as a food source.

THEORY TWO: As Theory #1 is probably not likely here is my second theory. Mr. Jordan fell asleep and had a dream where three ghosts, the ghost of basketball past, the ghost of money loving present, and the ghost of lonely and despised future came to give him a visit. Jordan woke up terrified after seeing his grave site that no one except Nike employees visits and vowed to mend his selfish ways.

THEORY THREE: This is what I think is the most likely theory. Mr. Jordan has started to realize that he doesn't live in a bubble and is acknowledging what is going on around him. He has seen young NBA players like Lebron James, Dwayne Wade, Carmelo Anthony, and Chris Paul step up and want to help their communities with just not words but with their actions. Jordan did a self-check after watching those younger players and realized that it's a shame that he didn't carry on the activist legacy of James Brown, Kareem Abdul-Jabbar, and Muhammad Ali. He then realized that he is still a relatively young man, and there is still much that he can do with his fame, voice, and yes his money.

Micheal Jordan may not have come to this point in life when many of us would have liked him to, but it's better late than ever.

Yes, he is to be commended! I would also like to address that his name, Michael, in the 2nd sentence of the 2nd paragraph is misspelled. Just a pet peeve I have and I wouldn't want your story to lose credibility.