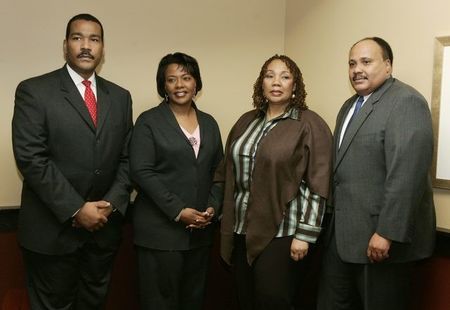 Martin Luther King Jr.'s heirs have agreed to end their legal fight over who owns the slain civil rights leader's 1964 Nobel Peace Prize medal, according to a court document filed on Monday, but did not disclose if the item will be sold.

A trial to settle the years-long dispute over the medal had been set to start in Atlanta on Monday. It would have pitted King's two sons against his surviving daughter, who were at odds over whether to sell the medal.

The three siblings serve as directors of a corporation formed to manage the estate of King, who had no will when he was assassinated in 1968 by a white supremacist in Memphis, Tennessee.

Martin Luther King III and Dexter King voted in January 2014 to sell the medal and a Bible their father carried during the civil rights movement in the 1960s. Bernice King objected to a sale, calling the heirlooms "sacred" to the family.

Superior Court Judge Robert McBurney had ordered the items to be kept in a court-controlled safe deposit box pending the outcome of the lawsuit.

The judge on Monday signed an order in which the parties asked for the suit to be dismissed and agreed the keys to the box should be given to Martin Luther King III, who serves as chairman of the estate board.