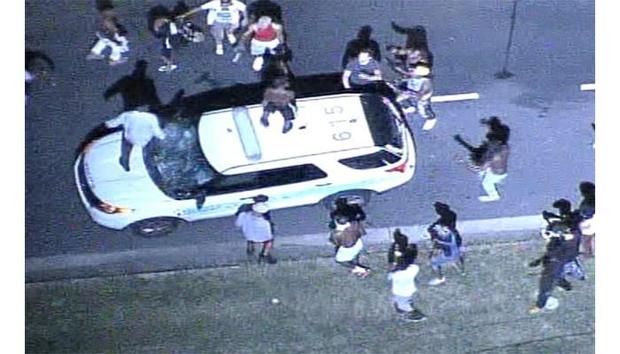 Police say a person was shot and killed in northeast Charlotte on Tuesday by a police officer, sparking protests, CBS affiliate WBTV reported.

Following the shooting, a large crowd has gathered near the scene in protest.

The incident happened around 4 p.m. at an apartment complex. Officers said they were searching for a person with an outstanding warrant when they saw a person get out of a vehicle with a firearm. The man has since been identified as 43-year-old Keith Lamont Scott.

The officers said they immediately requested MEDIC and began performing CPR, WBTV reported. The person was pronounced dead at the hospital.

WBTV reported that by 9 p.m., large crowds had gathered in the area of the shooting. Some were shouting at police, some held signs that read “Black Lives Matter” and “It Was A Book.” It appeared at one point the crowds were blocking patrol cars from moving in the street, and even climbing on top of them, according to WBTV.

At 11 p.m. large clouds of what appeared to be tear gas could be seen coming from the crowds of protesters after officers in riot gear were seen putting on gas masks.