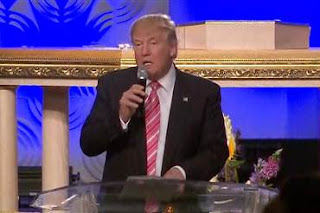 Here is Donald Trump's Civil Rights agenda that not surprisingly doesn't address four major civil rights issues. You could make the argument that it doesn't address any civil tights issues at all. The real question is how can a civil rights agenda not address voting rights, police brutality, environmental discrimination,  and pay equality? This is just another example of Donald Trump's smoke and mirrors approach to black issues.

“In his remarks today, Donald Trump called for a new civil rights agenda that includes the right to a safe community, the right to a great education and the right to a secure job. These civil rights are in addition to the fundamental, constitutional civil rights of our society and the absolute commitment to equal protection, ending discrimination and safeguarding the dignity of all citizens - and that includes their inviolable freedoms and liberties. Mr. Trump will also defend our religious freedoms, and the freedom of Americans from all communities to worship in peace.” – Pastor Darrell Scott
More detail will continue to be shared on these items in the coming days. Below is more detail on these points and links to previously-released policy papers and speeches on a number of the items.
THE RIGHT TO LIVE IN A SAFE COMMUNITY –
The first duty of our government is ensuring every citizen in America has the right to live and prosper in a safe community. We cannot solve poverty if we don’t also solve crime – security is the foundation of prosperity. Crime is a stealth tax on the poor, reducing their jobs, incomes, property values and undermining their schools. A top priority of a Trump Administration will be working with local communities, city and state police, federal law enforcement, and the Mexican government to combat crime. As a team we will dismantle gangs, remove violent offenders from the streets, and destroy the international drug cartels that thrive off the innocent victims in our cities robbing them of the future every citizen deserves. This will provide a foundation for other reforms to thrive – to education, trade and across the economy, along with social reforms and religious empowerment to strengthen families as the foundation of opportunity. This is all part of rescuing millions from poverty and fear that no American should have to experience.
THE RIGHT TO A GREAT EDUCATION OF YOUR CHOICE –
At the center piece of our agenda is the empowerment of parents and children in school choice. States should have flexibility to use federal dollars to help parents and students find educational opportunities that meet their needs – including charter schools, magnet schools, private schools, religious schools, and home schooling. A portion of existing education aid should be contingent on states developing school choice programs. The failed government education monopoly discriminates against students in the inner cities by denying them the choice they deserve.
We will end discrimination in all of its forms.
We will use federal resources to encourage states to provide choice, while also encouraging curriculums geared toward success in the workplace – not arbitrary standards – and programs that provide students with in-demand skills and matches them up with both college courses and career courses.
THE RIGHT TO HAVE YOUR JOB PROTECTED –
The current policy of economic globalism violates the civil rights of American citizens by failing to protect and prioritize their jobs and wages from foreign competition. The movement of jobs offshore, combined with the uncontrolled flow of workers onshore, has concentrated wealth at the top and put American workers at a disadvantage. Economic surrender to the mercantilist and predatory trade practices of foreign countries has steadily eroded the economic conditions of Americans, particularly in our inner cities.
At the same time, illegal immigration violates the rights of American citizens in general – and African-American citizens in particular – by stripping them of the equal protection of the laws, which include the laws passed to protect them from illegal competition. Illegal immigration, while enriching the owners of capital, has disproportionately harmed low-income African-American and Hispanic citizens. As Harvard Professor Dr. George Borjas documented: “The employment rate of African-American men—defined as the fraction of weeks worked during a calendar year by the typical black male—fell from 73.2 percent in 1960 to 64.3 percent in 2000… The data reveal a strong correlation between immigration and black wages [and] black employment rates… As immigrants disproportionately increased the supply of workers in a particular skill group, we find a reduction in the wage of black workers in that group [and] a reduction in the employment rate.”Further crucial steps will need to be taken to do a top-down reform to add millions and millions of new great jobs – energy reform will add half a million new jobs a year, along with dramatic tax and regulatory reform to bring thousands of new companies to our shores and into our poorest communities. This, combined with repatriation of overseas profits, and a bold national infrastructure program, will create trillions in new wealth to invest into our communities and our workers.