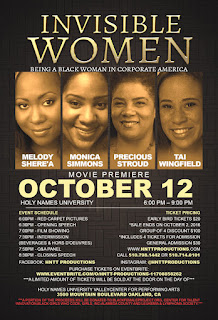 Head Not The Tail Productions (HNTT Productions) is excited to announce the forthcoming screening of its important and timely documentary titled Invisible Women: Being a Black Woman in Corporate America. The film, directed by Melody Shere'a and executive produced by Monica Simmons, is a powerful and inspiring documentary that is the result of a year-long research study interviewing black professional women in the San Francisco Bay Area and New York City. Invisible Women uncovers and addresses issues around racism that profoundly affect black women in the corporate workplace. The women share respective experiences of disappointment and rejection when simply trying to earn a living and/or compete against white, Asian and women of other races for a higher step on the corporate ladder. Invisible Women will screen Wednesday, October 12, 2016 from 6 to 9 p.m. at Valley Center for the Performing Arts, a unique performance facility that exists in the Oakland Hills on the scenic campus of Holy Names University (3500 Mountain Blvd., Oakland, CA). The evening will encompass the film viewing, reception and panel discussion. Tickets are $20 through Oct. 2; $30 thereafter.
"For the production of Invisible Women, we interviewed black women of varied professional levels who generously shared their previously untold stories and feelings around race-related issues on the job," said Shere'a, HNTT Productions founder and CEO. "In conducting the research, we found the corporate practice of discrimination to be a common harsh reality faced by countless women of color. We also interviewed experts who provide employment reports and statistical data on this topic."
Shere'a, the film's director and executive producer Simmons are talented sisters. They have each personally experienced workplace race and gender discrimination throughout their corporate careers, which is how they conceived the idea to develop this documentary.
HNTT Productions partnered with non-profit organizations BlackFemaleProject.Org and Center for Talent Innovation to dig into the issues, look at the facts, explore the reality of working in corporate America as a black woman and delve into ways to improve the environment for tomorrow's young black corporate professionals.
While there is certainly lobbying at local, state and federal levels for gender equality and diversity in the workplace, women's discrimination remains a troubling issue that as yet has not been adequately addressed. Though numerous entities address the issue by hiring and promoting more women into management positions and corporate executive roles, a considerable recognition/advancement gap still exists for black women.
The playing field isn’t level and well-qualified black women are too frequently denied the opportunity to explore similar career growth opportunities as their white and other female counterparts. The facts and details you will learn from this documentary will surprise you.
About News noted in a May 2016 report that although black women only make up 12.7 percent of the female population in the country, they consistently make up over 50 percent—and sometimes much more—of the number of blacks who receive postsecondary degrees. Percentage-wise, Black women outpace white women, Latinas, Asian/Pacific Islanders and Native Americans in the education arena. However, a recent study found black women make up just 8% of private sector jobs and 1.5% of leadership roles.
Shere'a has a passion for empowering and mentoring young girls, and is a "Woman of Impact" member for Girls Inc. Alameda County. A portion of the event proceeds will be donated to the following organizations: Black Female Project, Girls Inc Alameda County, Girls Who Code and Leukemia & Lymphoma Society. To contribute directly to the fund, visit IndieGoGo crowdfunding page.
ABOUT HEAD NOT THE TAIL PRODUCTIONS (HNTTP): HNTT Productions, founded in 2016 by Melody Shere’a, is located in the heart of Oakland, California. The company creates, develops, produces and invests in film, television and documentary projects. The entertainment industry veteran possesses more than 10 years acting, print modeling and voice-over experience. She is a member of the Screen Actors Guild (SAG). Shere’a graduated from Cal State Hayward, where she earned her Bachelor’s degree, and later pursued an MBA in Finance at Holy Names University in Oakland.
Monica Simmons is the Executive Producer of the documentary and head of production and film development for HNTT Productions.
Shere'a, HNTT Productions CEO states, "For too long our stories have been left behind. It is HNTTP's goal is to bring forth the change needed in the entertainment industry by becoming the 'Head and Not The Tail' in this business".    HNTTProductions.com
Posted by Councilman George L. Cook III at 5:10 AM